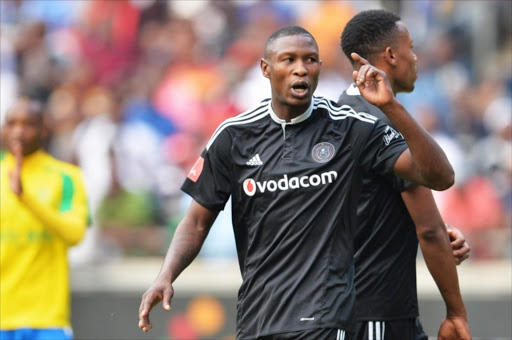 Ayanda Gcaba is one of the players that recently parted ways with Orlando Pirates.
Image: Gallo Images

In order to maintain stability and tranquillity at the club‚ former Orlando Pirates winger Joseph “Dukuduku” Makhanya has advised the Buccaneers to release more players to make room for their nine new signings.

Pirates have been one of the busiest clubs in this transfer window after securing the services of former Kaizer Chiefs goalkeeper Brilliant Khuzwayo and versatile Chippa United midfielder Abel Mabaso‚ among others.

So far the Soweto giants have only parted ways with Ayanda Gcaba‚ Riyaad Norodien and Brighton Mhlongo whom all were loaned out in the past season.

Makhanya believes the club must let go of more players to accommodate the new faces.

“The club have made great acquisitions but my worry is that they might be instability and clash of personalities if they do not release some of the players.

"I would advise that they release more guys so that they’ll be stability‚’’ said Makhanya.

“You also cannot use all these players‚ keeping them while they will not be used will kill their careers.

"The team was very strong last season and to keep that form in the new season‚ you must manage the players very well.”

Dukuduku is optimistic the new signings will add value to the club‚ feeling that the Sea Robbers will challenge for every trophy on offer next term.

Makhanya also feels the newcomers will help the club in their CAF Champions League pursuit.

“These new players are pure quality. I cannot wait to see them playing for the club.

"They add depth and value to the team. Next season‚ I think Pirates will be one of the teams to beat. They will challenge for each and every trophy.’

"I know their ultimate goal is to do well in the Champions League and with these players‚ I believe they will achieve that goal‚’’ noted the 36-year-old retired winger.