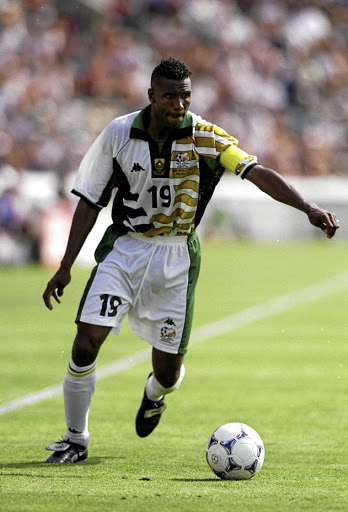 Lucas Radebe turned out for Bafana at the 1998 World Cup in France.
Image: Shaun Botterill/Allsport

Tomorrow will mark 20 years since Bafana Bafana made their Fifa World Cup debut in France.

South Africans will have fond memories of the glory days of the 1990s when Bafana graced the world stage for the first time.

SA had claimed its rightful place among the international community of football nations at the global spectacle following years of isolation due to racist apartheid policies.

Exactly two decades ago on June 12 in their opening game, SA took on hosts France at the Stade Velodrome in Marseille where they were crushed 3-0 by the Zinedine Zidane and Thierry Henry-led Les Blues in front of a capacity crowd of 55000.

The moment that still stands out from that game is Pierre Issa's own goal in the 77th minute past goalkeeper Hans Vonk.

Although they didn't secure any win in Group C alongside the hosts, Denmark and Saudi Arabia, former captain Lucas Radebe feels Bafana then were a huge source of national pride.

"Going into the World Cup you could feel that the entire nation was behind us and we were proud as players to represent the country," Radebe recalled.

"I remember before we left, we met with the old man, Tata Nelson Mandela and he gave us words of encouragement. Even though we did not win, we had that spirit and it was a wonderful experience."

That period under coach Phillip Troussier was not without its controversies, though - the biggest of which was the expulsion of Naughty Mokoena and Brendan Augustine from the squad.

Before their final group clash against the Saudis, the pair were sent packing for breaking a curfew set by the iron-fisted French coach.

Another player who had a nightmarish tourney was former midfielder Maimane Phiri. He received a red card in the 1-1 draw against Denmark.

Phiri reflected: "I did not play the first match against France. When I got an opportunity against Denmark I was excited and anxious at the same time. It was all a bit too much for me as a young man and in the heat of the moment and rush of blood I got sent off.

"I really felt bad about it. I thought I could have done better," Phiri said.