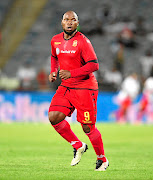 The experience of two veteran strikers in Collins Mbesuma and Madoda Motha was undoubtedly the catalyst for Maccabi's promotion from the ABC Motsepe League to the National First Division (NFD).

Both clubs will compete in the NFD in the new season by virtue of reaching the final.

Mbesuma, 34, did not play group-stage matches but was only unleashed in the semifinal clash against Dolphins, where his goal and two assists propelled the Gauteng-based side into the final.

In the decider, the experienced striker netted the equaliser before scoring the winning penalty after the game had ended in 1-1 stalemate.

The 33-year-old Motha, alongside Mangaung United's Dikotso Mabaleng and Thobani Mthembu of Umvoti FC, finished as the tournaments' top-scorers with three goals each. The trio shared R100000 prize money.

Having previously turned out for the likes of Jomo Cosmos and Free State Stars, Motha is a seasoned-campaigner and his expertise helped Maccabi.

"The presence of Motha and Mbesuma was key for us. Their experience helped the team a lot. What I like about them is that they also guide and advise the youngsters," Tsotetsi told Sowetan yesterday.

"Mbesuma still has that drive and hunger. He still wants to win things. As experienced as he is, he's still humble and willing to take instructions from the technical team. I enjoy coaching these guys [Mbesuma and Motha] because they listen."

Tsotetsi is optimistic that he'll still be the mentor when the team embark on their NFD journey.

"We will have a meeting with the management sometime next week. I am positive that they'll keep me.

"We have to plan for the NFD but we have no pressure," noted Tsotetsi, whose side walked away with R1million prize money.