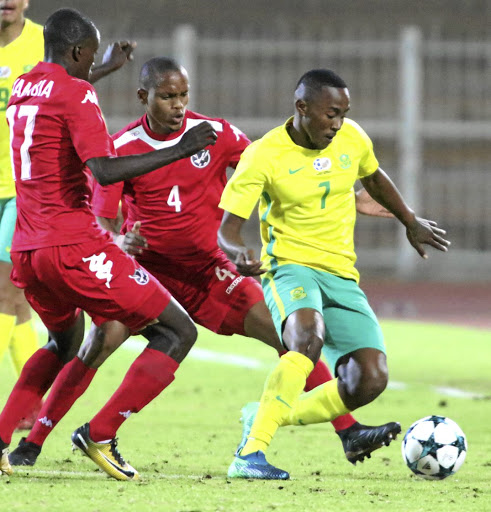 Lebohang Maboe is honest about whether he thinks a young player should take a chance to go to a big club and progress in their careers or stay at the smaller club and develop their game a little more first.

Revealingly‚ from the Maritzburg United star sure to be in high demand in this off-season’s transfer merry-go-round‚ Maboe feels players should take their chance.

Maboe and his Maritzburg teammates – Siphesihle Ndlovu‚ Fortune Makaringe and Siyanda Xulu – at this year's Cosafa Cup‚ where Bafana Bafana meet Botswana in Friday's Plate final at Peter Mokaba Stadium (5pm)‚ were instrumental in the young KwaZulu-Natal team just having their best season.

United finished fourth in the Absa Premiership and lost in the Nedbank Cup final to Free State Stars.

Big teams are sure to be sniffing at Maritzburg's rough diamonds‚ and anticipating that the club have put up not for sale signs locally‚ saying they will only sell players overseas.

Maboe‚ though‚ suggests he knows it will not be easy to resist of Kaizer Chiefs or Mamelodi Sundowns come knocking.

"I know that‚" the skilful 23-year-old midfielder chuckled.

He added: "But at the same time I have to know that I've got a contract with Maritzburg United‚ which I have to honour.

"If they feel like they don't want to sell me now‚ as sad as it is‚ I'd have to understand that maybe it's the right thing to do."

The point is raised that there is nothing wrong with young players spending one more year at a small club‚ earning game time and continuing their development.

"But I honestly don't believe in that‚" Maboe stressed.

"If you look at European-based players‚ if you look at Isco signing from Malaga for Real Madrid [at 22 in 2012‚ after two good seasons at Malaga]‚ Madrid are a very big team and you'd have expected him to be under all sorts of pressure. But he did well.

"I feel that‚ with us South African players‚ we tend to get too comfortable. And that's not what I want for myself.

"I don't like being in a so-called comfort zone. I like challenging myself‚ getting new experiences‚ meeting new players‚ being in a totally different environment.

"I feel that helps one to grow."

"Firstly it's from the team I played for as an amateur growing up in Heidelberg‚ Ratanda Real Hearts.

"I developed that skill there playing for the under-17s when I was 14. I was a step ahead of boys my age.

"It was refined being at Kaizer Chiefs' development [before signing for First Division Mbombela United in 2015] under coaches like coach Arthur Zwane‚ Doctor Khumalo‚ which helped me with my technical side of my game."

Bafana‚ playing a 4-3-3‚ were not aggressive enough in their opening penalties quarterfinal defeat against Madagasca. SA struggled to get Maboe and Ndlovu‚ playing in a three-man midfield in front of Makaringe‚ on the ball.

SA bounced back with a 4-1 Plate semifinal thrashing of Namibia‚ where Maboe was pushed up as a deep striker in a 4-4-1-1 behind centre-forward Ryan Moon‚ and scored a brace.

He will be looking to make a similar impression against tough Botswana‚ still unbeaten in regulation time in five games in this Cosafa‚ in Friday’s Plate final.