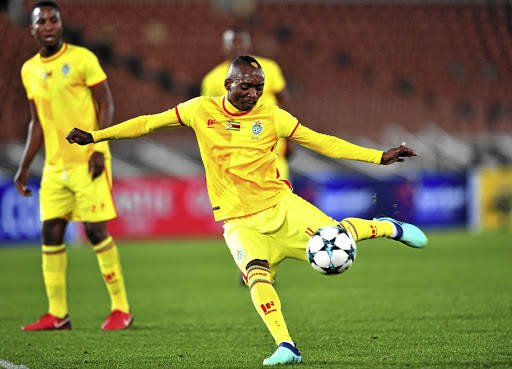 Khama Billiat has not taken a break as he plays for Zimbabwe in the Cosafa Cup in Limpopo.
Image: Samuel Shivambu /BackpagePix

Zimbabwean forward Khama Billiat is taking it easy at the Cosafa Cup currently under way in Polokwane, Limpopo.

The Mamelodi Sundowns star will be out of club contract by the end of this month, but he's taking his time to decide on his next move, that's if he even leaves the Brazilians.

Some reports claim that Sundowns have offered the 27-year-old a whopping R5-million per annum to stay, including signing-on fees.

Billiat, though, appears to be overwhelmed with interest from other clubs and will not commit on whether he may prolong his stay at Sundowns.

"I have to look at it, I have to look at the offers. I will love to say ... I don't know man," said Billiat, who sounded like he wanted to let something off his chest but decided against doing so.

"Hopefully, in the end the decision that we [together with his manager Mike Ngobeni] will make will be the right decision for football and everything," he said.

Zimbabwe have named want-away Mamelodi Sundowns forward Khama Billiat in their final squad for the COSAFA Cup‚ but were dealt a blow when star ...
Sport
3 years ago

Billiat is just one of many PSL players who are at crossroads regarding their futures.

The likes of Travis Graham [Ajax Cape Town], Daine Klate [Bidvest Wits] and Asavela Mbekile [Mamelodi Sundowns] are pondering their next moves with their current deals expiring at the end of June.

Meanwhile, Billiat has not taken a break as he's featuring in the ongoing Cosafa Cup in Limpopo.

He was in the Warriors' side that beat Botswana on penalties at Peter Mokaba Stadium at the weekend to reach the semifinals.

Zimbabwe will face Lesotho in the last four tomorrow.

It may be considered a less important tournament, but Billiat is well aware of its value.

"It's a great opportunity for us. Players look at football differently, and for me there is no small tournament because you never know what can happen out of that tournament.

"We've seen it happen that a lot of players [from Zimbabwe] who are based here [in South Africa] come from this tournament," Billiat added.