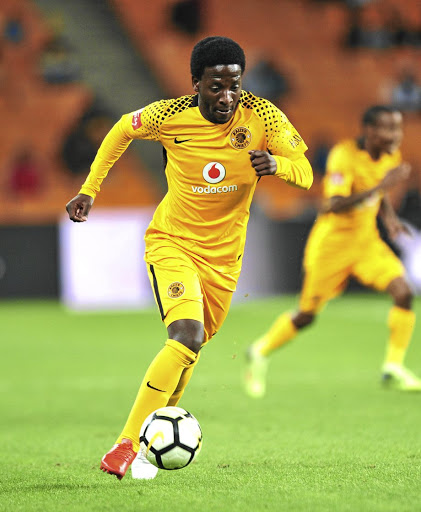 Siphelele Ntshangase will be hard-pressed to live up to the hype prior to his switch to Chiefs.
Image: Samuel Shivambu /BackpagePix

Brazilians coach Pitso Mosimane has apparently predicted that Lebese will be the "man to mark next season" after a lukewarm first season at Chloorkop.

Many will have their doubts after the former Kaizer Chiefs man started in just 15 matches in all competitions in his first season at Sundowns.

This, however, is the same Mosimane who predicted at the start of last season that Percy Tau would be PSL Footballer of the Season.

The former Black Leopards and Baroka midfielder promised to execute "champagne passes" on his arrival at Naturena in January.

And a few months later, the 25-year-old will be hard-pressed to live up to the hype prior to his switch to Amakhosi. Since Chiefs have now gone three seasons without a trophy, the expectations on the team and individual players will reach their peak.

Many probably thought the striker would hit the ground running for the Brazilians.

While the goals were easy to come by at his former employers SuperSport United (54 in 119 appearances), it's been a different story at Sundowns.

Brockie has not broken his duck in about 15 games for the reigning Absa Premiership champions.

There's no doubting his qualities, but the fact that he was even booed during the season proves a lot more is expected from him.

Jayiya made history when he scored the PSL's fastest hattrick [in the space of 10 minutes] for his old club, Cape Town City, when they beat Chippa United 4-1 just over a year ago.

Those performances will endear him to the hearts of Chiefs faithfuls.

The goalkeeper spent the last season on loan to Chippa United, and it appears he's on his way to Cape Town City for next season. The Chippa switch last term was meant to revive his career. While there, he managed to put together five clean sheets in 10 games, which is a fair return.

The reality, however, is that Mhlongo didn't play enough for the Chilli Boys and he would have his work cut out to prove to the nation that he's still in the game.