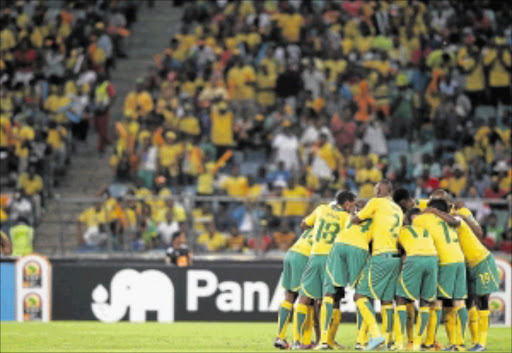 Bafana Bafana will take on Madagascar during the Cosafa Cup quarterfinals on Sunday (3pm) at the New Peter Mokaba Stadium in Polokwane.

The knockout stage gets under way on Saturday afternoon when Zambia tackle Namibia and that match will be followed by an encounter between Lesotho and Swaziland while Zimbabwe and Botswana will battle it out on Sunday.

The quarter-final stage was completed by Botswana who thrashed hapless Mauritius 6-0 in their Group B clash to register their biggest ever victory in international football.

The matches are expected to pull a sizeable crowd with entrance to the World Cup stadium free and with Bafana Bafana seeking to avoid an embarrassing quarterfinal exit for the second year running.

If Bafana get past unfancied Madagascar‚ they will meet the winner of the clash between Zambia and Namibia in what will be a tough semifinal, while failure to progress will see Stuart Baxter’s men drop to the Plate competition.

South Africa claimed the Plate section in 2017 after losing to Tanzania in their quarterfinal game.

On Friday‚ Botswana scored four goals inside the opening 26 minutes against a limp Mauritian side at the Old Peter Mokaba Stadium.

A tired-looking Mauritius could not handle the pace of the Zebras players‚ but also lacked organisation at the back as the Botswana had the freedom of their penalty box.

Thatayaone Kgamanyane was gifted a third when a Mauritian defender cleared the ball into his path‚ and he showed great composure to side-foot past the goalkeeper.

The fourth goal was scored by Kabelo Seakanyeng‚ who moved joint top of the scorers charts in the 2018 Cosafa Cup with a third of the tournament to draw him level with Mozambique’s Luis Miquissone.

Mauritius started the second half with a bit more energy in their play‚ but fell further behind when substitute goalkeeper James Caserne completely missed his punch from a corner and Botswana fullback Tshepo Maikano turned the ball home.

It was 6-0 on 70 minutes when Makgantai got his second‚ profiting as Caserne dropped a routine catch and the Botswana forward scored into an empty net.

He also joins Miquissone at the top of the scorers' charts.

Angola and Malawi played to a 0-0 draw in their other Group B fixture on Friday‚ a game littered with missed chances.

All matches at the New Peter Mokaba Stadium

Zimbabwe have named want-away Mamelodi Sundowns forward Khama Billiat in their final squad for the COSAFA Cup‚ but were dealt a blow when star ...
Sport
4 years ago

The Premier Soccer League has improved and produces a better quality of player now than when Stuart Baxter was last Bafana Bafana coach‚ he has said‚ ...
Sport
4 years ago

Newly promoted Highlands Park have opted to start their pre-season training at least a fortnight before the next club in order to be ready for their ...
Sport
4 years ago
Next Article