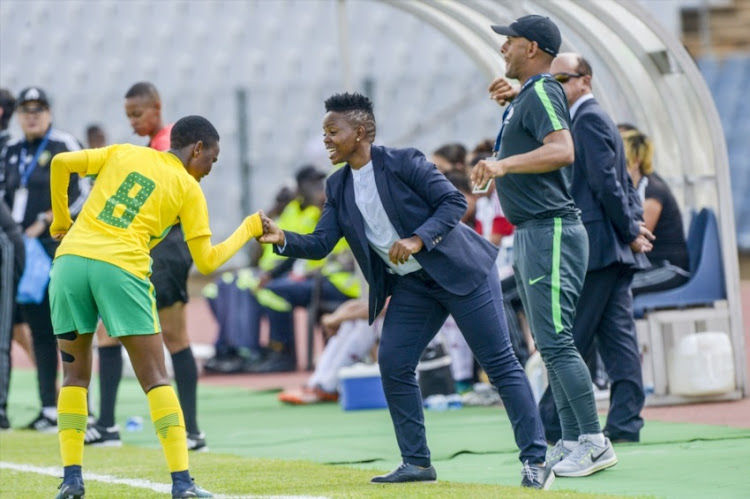 Karabo Dlamini of South Africa celebrates with coach Simphiwe Dludlu of South Africa after scoring a goal during the U17 World Cup Qualifier match between South Africa and Morocco at Dobsonville Stadium on February 04, 2018 in Johannesburg.
Image: Sydney Seshibedi/Gallo Images

The South African team to compete at the FIFA Under-17 Women’s World Cup have been handed a tough draw as the new generation of Banyana Banyana hopefuls look to make their mark at the global finals in Uruguay later this year.

Bantwana will tackle traditional giants Brazil‚ 2014 champions and 2016 runners-up Japan‚ and a qualifier from the CONCACAF region that will be decided next month but is likely to be one of USA‚ Canada or Mexico.

“I would not say it’s an easy draw because all the teams that we are grouped with are experienced as they have been there before‚” coach Simphiwe Dludlu said.

“If you also look at the CONCACAF teams that still have to qualify‚ the favourites USA‚ Mexico and Canada‚ and don’t forget Haiti because they surprised everyone and qualified for the Under-20 Women’s World Cup.

"So this certainly tell you that whichever team we will get from CONCACAF is also not going to be an easy side to play.

“Brazil has done well in this competition – they have qualified four times of the five times since 2008 at the inception of the tournament.

"That tells me that they have a lot of experience. In the last tournament they were knocked out in the group stages‚” added Dludlu.

“Brazil is known as a footballing country and their development structures are a little better than us as they start playing from an early age – and that put them at an advantage than most countries‚ especially the African continent.”

Dludlu admits that the biggest challenge is likely to come from the Japanese.

“Japan is a very impressive team‚ and it comes as no surprise because we know the Asians teams always do well in international competitions‚ especially China and Japan – with the latter the most successful team even at senior team level.”

Bantwana will open their pool campaign against the CONCACAF qualifier on November 13 in Maldonado.

“The long and short of it is that it is not going to be an easy one. We will be up against the best of the best‚ which makes it clear for us that our planning needs to be very vigorous.

"It must be the kind of preparation that says we know what we want‚ and must include a lot of friendlies.

“We need to expose our team to international football as much as we can before the tournament‚” said Dludlu.

Bantwana’s only previous visit to the global showpiece was in 2010 when it was hosted in Trinidad & Tobago.

They lost all three games to Germany (1-10)‚ South Korea (1-3) and Mexico (0-4)‚ but the tournament helped to launch the careers of the likes of Jermaine Seoposenwe‚ Kaylin Swart‚ Robyn Moodaly and Meagan Newman.

The Premier Soccer League awards will be handed out on Tuesday night‚ honouring those players‚ coaches and match officials who excelled in the ...
Sport
4 years ago

A heaving Thohoyandou Stadium roared Black Leopards back into the Premier Soccer League for the first time in a half-decade with the Limpopo team's ...
Sport
4 years ago

Siphesihle Ndlovu has credited his Maritzburg United coach Fadlu Davids with his nomination for the Premier Soccer League Footballer of the Season ...
Sport
4 years ago

Bloemfontein Celtic say reports that the club has already been sold to a Kimberley businessman are “untruthful and misleading”‚ according to a ...
Sport
4 years ago
Next Article