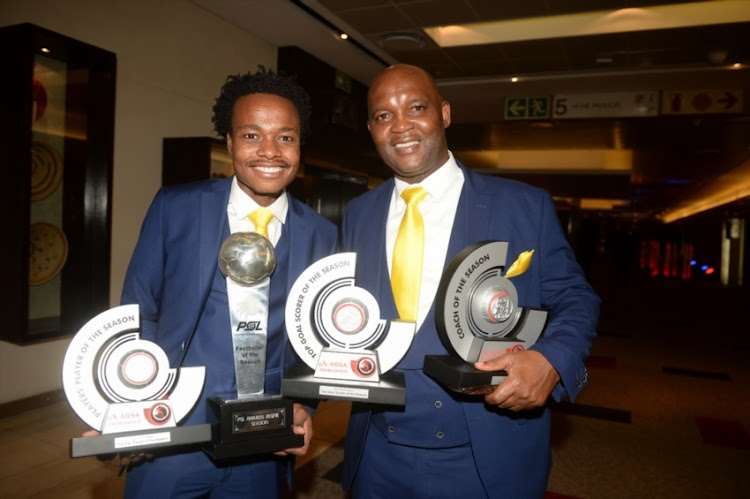 English Premier League side have joined a long list of suitors that are bidding for South African Footballer of the Year Percy Tau‚ his Mamelodi Sundowns coach Pitso Mosimane has confirmed.

The Witbank-born star has attracted interest from overseas following his stellar performances for both club and country‚ which‚ according to Mosimane‚ have earned him attention from clubs in Lique 1 in France‚ Serie A in Italy and Germany’s Bundesliga.

It looks increasingly inevitable that the 24-year-old star will be lost to Sundowns come next season.

“Percy is going to be difficult for us (to retain).

"Premier League teams (want him) now‚” revealed Mosimane‚ who also shared the spotlight with his star player after he won the Premier Soccer League’s Coach of the Season award on Tuesday night.

Tau’s sensational season with champions Sundowns was justly rewarded at a glitzy ceremony at Sandton’s Convention Centre on Tuesday as he walked away R462‚500 richer after clinching the country’s highest honour that can be bestowed upon a player – the Footballer of the Year award - the Player’s Player of the Season award and the top scorer award.

“We’ve been talking about top five leagues for him‚ not to go to Denmark‚ Sweden what is he going to do there?”

“Basically (he is a wanted player) for what he has done for the year and also the Barcelona game has given him the opportunity.”

The 24-year-old also won the the Players’ Player of the Season gong and shared the Golden Boot award with Polokwane City striker Rodney Ramagalela having scored 11 goals in the league.

“My opinion? I think he must go (overseas) guys. Let’s have a player in the EPL we’ve got nobody now.

“He has done well for us what else can he do for us? You know let’s see him abroad week in and week out and let’s judge him there is he is the real deal or not. So let him go‚” said Mosimane.”

The Sundowns coach also seemed resigned to losing another star player in Khama Billiat but said he has no idea where the Zimbabwean attacker is headed.

“It’s in Khama’s hands‚ nobody knows until you guys have a scoop‚ I don’t know. And I’m honest you know that I f I knew I’ll tell you (the media).”