Sad Madisha banks on Cosafa to find himself 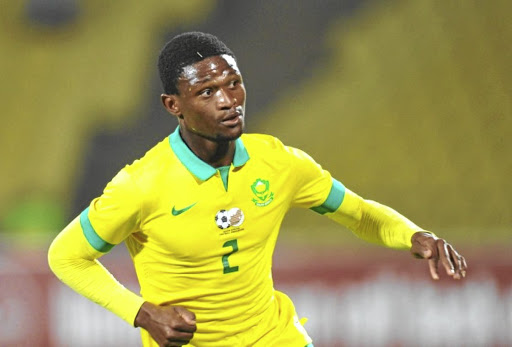 After a difficult season with Mamelodi Sundowns, defender Motjeka Madisha is eager to rekindle his form at international level with Bafana Bafana.

Madisha is part of the 20-man squad at the Cosafa Cup taking place in Polokwane in his home province of Limpopo.

The 23-year-old player had a challenging second season in the first-team where his form took a dip, due to "the death of his sister".

Despite his struggles, Madisha became a league champion for the first time as Sundowns secured their record eighth title.

The former under-23 national team captain believes playing in the international tournament between Southern African nations can help him get back to his best.

"In my career, some of the moments where I was playing my best football were with the junior national teams, so playing at international level again will be good for me," Madisha said.

"At club level I know it was not my best season but as you know we had a death in the family and it was not easy. But at least we won the league title and I will come back better and stronger next season."

Bafana will commence their participation in the tournament in the quarterfinal stage where they will take on the winner of Group A on Saturday.

That group is a contest between Seychelles, Comoros, Madagascar and Mozambique. While many footballers will be taking a break after a long season, the players at the Cosafa competition have had to change their holiday plans.

The Zebediela-born defensive player aims to take it back to basics playing in his home province.

"The tournament will be playing not far from home so that will be a plus for me," Madisha said.

"I will be playing in front of my home fans where I will be free and confident to express myself. Any opportunity to represent the national team is a chance to learn and grow," he added.