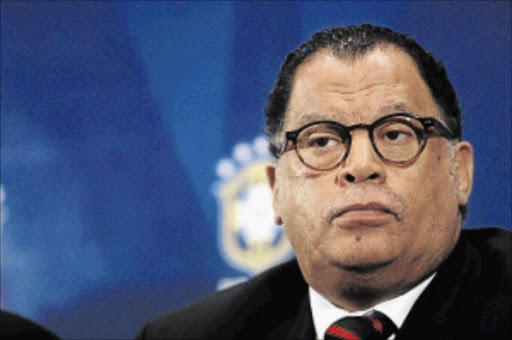 "It's nonsense. Absolute nonsense", Jordaan said when asked to respond to Ncobo's allegation that the election was illegal.
Image: Veli Nhlapo

Danny Jordaan has denied any allegation that the South African Football Association (Safa) elective congress in which he stood unopposed to be re-elected Safa president was illegal.

Jordaan's sole opponent in the election at the Sandton Convention Centre‚ Andile 'Ace' Ncobo‚ walked out of the conference claiming he had been threatened after the former referee's attempts to have the congress halted on grounds of various Safa statutes not having been obeyed was unsuccessful.

Jordaan won a second five-year term by 236‚ or 95.12%‚ of the 246 votes‚ with two voting against the former 2010 World Cup Organising Committee CEO‚ one vote spoilt‚ and the remaining 10 either having abstained or were not present.

Asked to respond to Ncobo's allegation that the election was illegal‚ Jordaan was initially angry at the question.

"No‚ no‚ no. You guys [the media] must stop nonsense‚" Jordaan responded.

"It's nonsense. Absolute nonsense. And you only do it to football. And why do you do that?"

It was pointed out to Jordaan that Ncobo made the allegations.

"No‚ but some of you actually wrote as if it's true. And it's nonsense. Here you are‚ witness to the election. You are sitting in the room. You see for yourself.

"You have in this room the electoral committee. Some of these men are senior advocates. They have acted as judges in the supreme court in this country. In this room we have a representative from FIFA.

"So it's your choice. You can pick whose opinion you want to listen to. You listen to a supreme court judge‚ you listen to the FIFA representative‚ or you listen to an opinion that is not based on anything.

"That is your choice. And as journalists you have the right. You have the pen‚ and you write what you like - and we grant you that license."

Jordaan added: "This is a transparent process in front of you. It's not on hearsay. And where people raise issues we step back to say that we don't want a discredited election.

"On Friday there was an attempt to stop this election. It was dismissed by the court. And the court said proceed.

"What else do you want?"

An initial elective conference for March 24 was called by Safa.

An urgent application was brought at the Johannesburg High Court on Friday morning to halt the elections by three Local Football Associations for Safa's Waterberg Region‚ which was struck off the roll.

Among Ncobo's objections were that that the nominees list was released by Safa nine days before the congress‚ not 14 days‚ as stipulated in the Safa statutes.

He and his backers have said that the electoral committee was handpicked by Jordaan‚ not elected‚ after the previous committee's tenure expired in August 2017.

Ncobo questions legitimacy of the elective congress.
Sport
3 years ago