Fears that Bloem could lose Celtic to outsiders 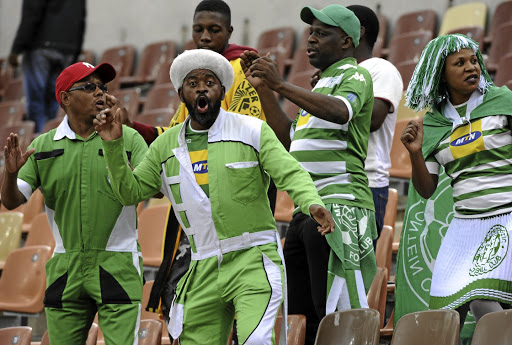 The sight of Bloemfontein Celtic's passionate fans in full cry may be cosigned to PSL history should the club be moved and renamed after its sale.
Image: Philip Maeta/Gallo Images

Bloemfontein Celtic - a club with a rich history of nearly 50 years and the most passionate supporters in SA - could be no more by next month.

The club is up for sale and there is no guarantee that the new owners will not change the name and relocate from Free State province.

Celtic are in dire financial straits and club owner Max Tshabalala has conceded that he cannot dictate that buyers keep operating the club under its current status.

"At the moment we have three offers on the table and they are from outside the province. I pray that I can get an offer from the province because at the moment I have nothing," Tshabalala said.

"If I sell to someone from outside I cannot impose a clause that the club must remain here, no.

"Unfortunately, once a club is sold, then it would be up to the new owners to take the club forward."

Sowetan has been informed that Tshabalala was looking to sell for R65-million.

He made a plea to fellow businessmen in the province to take over the club.

"I have an offer that is very lucrative but I have shelved it for now to await for an offer from home. I have the best interest of the club at heart.

"This club has a rich history and has never changed its base and we want it to continue being the Celtic that we know and love."

On the R65-million price tag, Tshabalala added: "As a businessman I cannot discuss that through the media."

The club management had a meeting with the supporters' executive committee on Monday to try to make them understand the current difficult situation.

"I informed them that I do not want a repeat of the situation we had last season of not being able to pay players' signing-on fees on time. Being without a sponsor, it's not easy and I had to take money from my other businesses to fund the club."