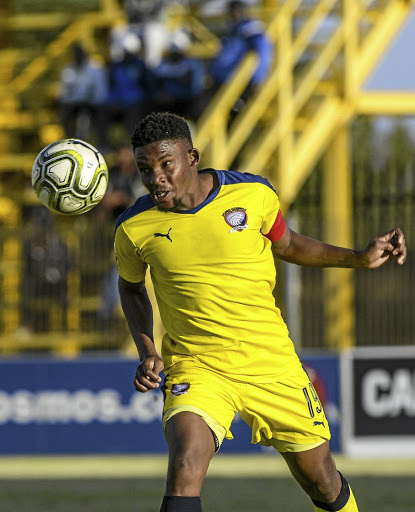 Talk about taking one for the team!

Jomo Cosmos captain Thato Lingwati is continuing playing in the promotion play-offs in spite of a personal tragedy.

Lingwati lost his one-month-old daughter last Friday, but soldiered on through the pain and grabbed a last-gasp equaliser in their match against Black Leopards.

Lingwati, 25, is one of the few experienced players in the current Cosmos team.

The tough Ezenkosi skipper conceded that it took a lot of courage for him to decide to play the match.

"There's a lot going on in my personal life. I lost my daughter [last] Friday... early morning. It took courage to play [against Leopards]. I was doing it for her. I had to be professional because the team also needs me," said Lingwati.

His goal rescued a point for his team, giving them a fighting chance of returning to the Absa Premiership.

"That goal was a blessing. I am a professional soccer player and I am employed by Jomo [Sono]. He needs me so I had to come and play."

The Burgersfort, Limpopo-born defender played 19 league matches when Cosmos were relegated from the Premiership in the 2015/16 campaign. He sounds confident of leading Ezenkosi back to the top flight, saying clinching promotion would mean a lot for him and his family after enduring the pain of losing his daughter.

Ezenkosi twice came from behind against Leopards to snatch a point. Lingwati thinks had they not managed to find the equaliser, their promotion dream was over.

Cosmos will be eager for maximum points when they travel to Moruleng Stadium to face Platinum Stars tonight (7.30pm). Dikwena lost their first game against Leopards and are bottom of the table.