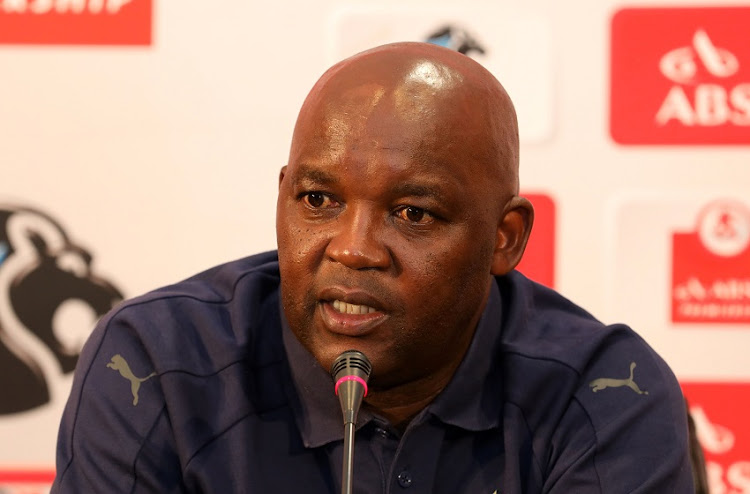 Pitso Mosimane, coach of Mamelodi Sundowns during the Absa Premiership 2017/18 Coach and Player of the Month Announcement at PSL Offices, Johannesburg on 09 May 2018.
Image: Muzi Ntombela/BackpagePix

Teko Modise says Mamelodi Sundowns mentor Pitso Mosimane should walk away with the premiership coach of the season award after leading the Brazilians to the league title last month.

Mosimane deservedly led Sundowns to an eighth league title a few weeks ago and there was no surprise when the Premier Soccer League named him as one of the nominees for the coach of the season award on Monday.

The outspoken Sundowns coach is favourite to win the gong and he will battle it out with Maritzburg United mentor Fadlu Davids and Orlando Pirates’ Milutin “Micho” Sredojevic for the top honour.

Modise‚ who is a former Sundowns and Orlando Pirates star‚ said Mosimane has done enough to walk away with the accolade after leading the Brazilians to an eighth league title since the inception of the Premier Soccer League in 1996.

‘‘Fadlu is young and he has turned Maritzburg into a difficult team to beat and to even play against‚” said Modise.

‘‘For him to have such a brilliant season in his first season as head coach is amazing. Normally it does not happen like that and most people struggle as well.

‘‘Coach Pitso has won the league and I mean he is a great coach. You can see the way Sundowns are playing in the African Champions League......

‘‘He has been doing this consistently as well and ja man‚ obviously they just won the league and he should be the coach of the season.”

Mosimane and Modise worked together at SuperSport United‚ Bafana Bafana and Sundowns and they won two league titles‚ the Telkom Knockout‚ Nedbank Cup‚ Caf Champions League and the Caf Super Cup with the Brazilians.

But their relationship became strained late last year when Modise made explosive revelations in his tell-all book‚ The Curse of Teko Modise‚ where he said he was not on speaking terms with Mosimane in the final two years of his career at Sundowns.

Modise‚ who now plays for Cape Town City under coach Benni McCarthy‚ also showered Sredojevic with praise and said the Serb had done sterling work after turning Pirates into a force to be reckoned with in his first season.

‘‘They have got so much energy and you can see how creative they are‚ they want to score goals.

The awards ceremony will take place at the Sandton Convention Centre on Tuesday night‚ May 29.

FOOTBALLER OF THE SEASON

Absa Premiership Goalkeeper of the Season:

Absa Premiership Defender of the Season:

Absa Premiership Midfielder of the Season: