Phungwayo has the last laugh over naysayers 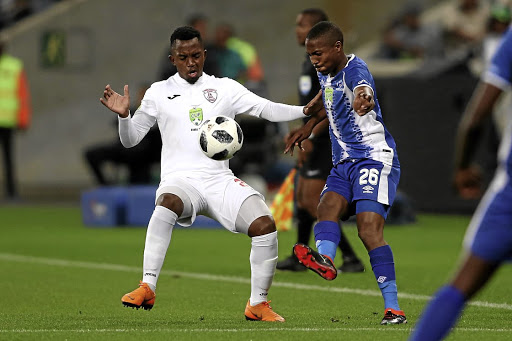 Many scoffed at his move to Free State Stars - referring to it as a downgrade after seven years at Orlando Pirates - but now Patrick Phungwayo has had the last laugh.

The wing-back won his third Nedbank Cup with a different team after Stars edged Maritzburg United 1-0 in the final in Cape Town at the weekend.

The 30-year-old has had an impactful first season with the Ea Lla Koto, where he missed only five games in all competitions. Phungwayo was pleased to make history with the club by ending their 24-year trophy drought.

"It's a great feeling and I am happy for the club after 24 years without a title and we have made history," he said.

"From struggling with relegation to fighting for a top-eight position and winning a trophy, it's been incredible."

Phungwayo also had high praise for coach Luc Eymael for his tactical acumen and coaching skills.

The two nearly worked together at Pirates when the Belgian was linked with the job at the Buccaneers but a last-minute change of heart saw the move fall through.

"The coach is a winner and he convinced me to come here. Stars have been in the league for many years and it was about time that we got the club to a top level," he added.

The former Wits defender admitted that his future at Ea Lla Koto was not guaranteed, as football was unpredictable.

"In football you can never guarantee your stay in any team. I enjoyed my stay at Pirates and achieved a lot, so Stars was a good place for me.

"I cannot talk about my future, I just want to celebrate rewriting history," said Phungwayo.