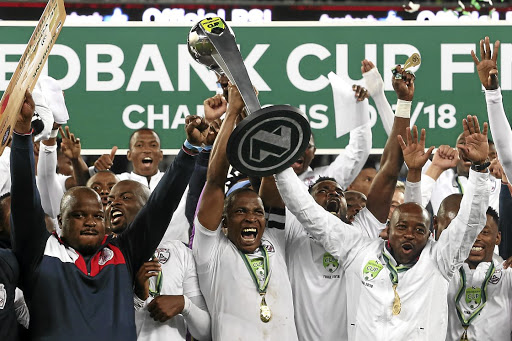 Free State Stars skipper Paulus Masehe feels his career will finally have a signature moment after steering his team to the Nedbank Cup.

Ea Lla Koto snapped their drought of 24 years when they won the Nedbank Cup final against Maritzburg United at the weekend.

The last time the team won a title was their 1994 triumph in the now defunct Coca-Cola Cup.

At the time, Masehe was only 11 years old when the likes of Serame Letsoaka and Joseph Maputshe inspired the team to glory back then.

Masehe's story is the quintessential hometown hero's story after he brought silverware to the club from his hometown in QwaQwa.

The 34-year-old has admitted that his emotions will run wild when he takes the
R7-million trophy to his community.

"It's been a dream for a long time, so I think I will be very emotional," Masehe said.

"It has just been incredible what we have achieved and what it means to the people
after so long. It will go down as the most memorable highlights of my career."

"It feels so great after it started off as a dream that took so long to realise when I felt that I would end my career without leaving a legacy," he said.

"Through the hard work it happened, and half of my teammates were written off."

Masehe plans to contribute to the team in the CAF Confederation Cup after their qualification by virtue of being the Ke Yona champions - and this through "brotherhood", after which he would consider retirement.

"We are like a family. Wherever there are issues in the team we are able to resolve them and work them out. I believe I can contribute much better from the sidelines."