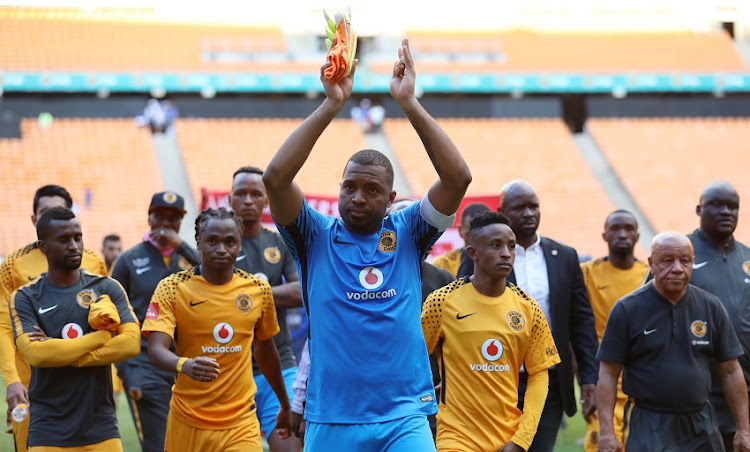 Itumeleng Khune of Kaizer Chiefs leads the team to the tunnel during the Absa Premiership 2017/18 match between Kaizer Chiefs and Chippa United at FNB Stadium, Johannesburg on 07 April 2018.
Image: Muzi Ntombela/BackpagePix

Itumeleng Khune is the front-runner to win the Premier Soccer League’s Goalkeeper of the Season award for 2017-18‚ the pundits say.

The awards will take place at Sandton Convention Centre on Tuesday night‚ May 29‚ with the nominees to be named on Monday.

Khune’s statistics are impressive. Playing for a Chiefs who laboured to third place in the PSL‚ he kept 16 clean sheets in 27 starts.

In the first half of the season Bafana Bafana’s No.1 won a number of man-of-the-match awards for an off-form Amakhosi‚ who largely owe their third placing to their keeper.

Although‚ Downs’ style of play‚ aiming to score more than the opposition‚ even if they conceded goals‚ probably played a role in that statistic.

Ofori was instrumental in Maritzburg conceding the second-least goals in the PSL‚ 23‚ after Chiefs on 22. Sundowns conceded 24‚ the third-least.

“It’s always tough because when you go on stats alone you don’t really see things like what were the key saves and things like that‚” said former SuperSport United goalkeeper Calvin Marlin‚ now assistant-coach at Ajax Cape Town.

“I remember when I won it [Goalkeeper of the Season] in 2006 I had actually not done a lot in the season in terms of amount of saves.

“But if you look at ‘Itu’ [Khune] generally I think he does stand out head and shoulders‚ then it would probably be Denis‚ and then Richard would probably fill in there somewhere.

“I mean‚ Richard looks a bit awkward and clumsy at times‚ but as a team Maritzburg did well this year.

“But if you look in general play‚ I don’t think Denis had as good a season as he did the year before.

“He conceded a few goals that you might have said in better form he would have saved.

“But in general if Itu is not playing for Chiefs they are going to struggle‚ because he’s made some key saves.”

“I was impressed with Denis Onyango because he is a solid keeper. He was consistent the entire season and helped Sundowns to ultimately lift the title‚” Komphela said.

“He proved to be the difference in most matches that he played and that put him in good stead. There is a strong case for Itumeleng Khune and Richard Ofori but I think Onyango is slightly ahead of them because he won the league.”

“This category is a bit tricky. I like what I saw from Maritzburg United keeper Ofori but I think Itumeleng Khune was outstanding for Kaizer Chiefs.

“There is also Denis Onyango who helped Mamelodi Sundowns to the title and Badra Ali Sangare of Free State Stars.”