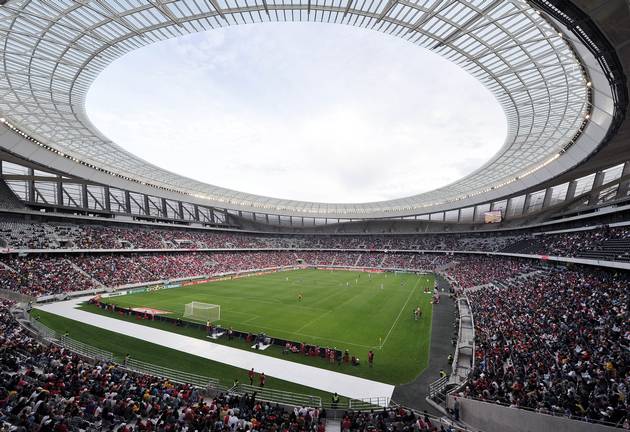 Twitter‚ if Donald Trump’s use of it is anything to go by‚ should not too regularly be used as a barometer of anything beyond a measure of monumental idiocy – in Potus’s case‚ the rating is clearly very high.

But the platform of twits‚ strangely enough‚ might give some insight into the respective and differing strategies of Maritzburg United and Free State Stars in Saturday night’s Nedbank Cup final at Cape Town Stadium‚ if not tactically on the field‚ then perhaps in approach.

History beckons for the two surprise packages of the 2017-18 season in a final that might not have the glamour of a top three team‚ but which deserves more respect than the minnow status of the participating sides might bring to it.

THE DAY HAS ARRIVED

Team of Choice fans, are you ready for the biggest day in the club’s history? #WeAreUnited

Anyone who has paid attention knows these two teams have‚ in their own fashions‚ played some very good football this season to end in sixth (Stars) and fourth (United) in the Absa Premiership.

For Maritzburg a cup final is already an historic first. Now a first trophy beckons for the little team from the KwaZulu-Natal midlands‚ who‚ with a young‚ super-talented squad containing starlets like Siphesihle Ndlovu and Lebohang Maboe have excelled under the PSL’s youngest coach‚ 36-year-old Fadlu Davids.

Ea Lla Koto can win their first trophy of the PSL era‚ their last coming in the Coca-Cola Cup (now Telkom Knockout) in 1994.

Both teams are run by prominent business families‚ though not with endless resources‚ from their respective cities and regions in United’s Kadodias and Stars’ Mokoenas‚ who have ploughed money and blood and tears into their teams.

So a cup final win for either will be rare‚ epic‚ and potentially fortune-changing. If anything‚ more rests on this final for these two teams than for a Kaizer Chiefs‚ Mamelodi Sundowns or SuperSport United‚ who have plenty of cups in the cabinet.

The approaches‚ as hinted at on social media‚ of the clubs though have contrasted greatly.

Maritzburg are clearly excited by this huge occasion for the club. They have posted tweet after tweet drumming up support not just from their own fans‚ but campaigning for it from neutrals in the Cape too‚ where they even sent Mother City-grown Davids and fellow officials to campaign at the start of the week.

Maritzburg have never been seen before‚ showed how big this final is for the team.

Stars have preferred to keep a low profile‚ posting far less on social media‚ and slipping into Cape Town as unobtrusively as they could.

Maritzburg had the better form reaching the final‚ notably blasting Sundowns away in a 3-1 semifinal win.

Stars never dominated any of their four early-round games‚ not even their 2-0 semifinal win against Chiefs. But their battlers have more experience than United’s young rising stars‚ and in a cup final that can count for a lot.

What an intriguing matchup. Let’s hope a few people watch it‚ because they should.

Top 10 signings that stole the limelight in Premiership stage

As the season comes to an end, there have been some top signings that made a huge impact in their clubs.
Sport
4 years ago

Maritzburg United have made a whistle-stop visit to Cape Town to drum up support for the side in Saturday’s Nedbank Cup final against Free State ...
Sport
4 years ago

Move to fill up stadium for final

PSL and sponsors hit the road to get people to buy tickets for Saturday's Nedbank Cup match.
Sport
4 years ago
Next Article