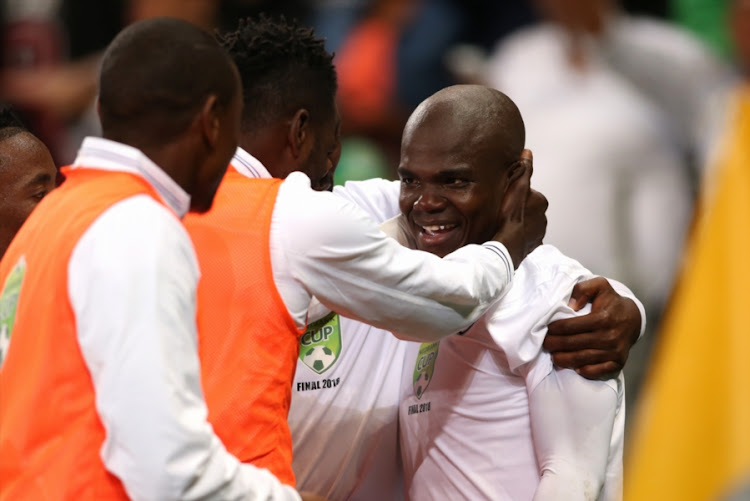 Free State Stars put together one of the more collected performances of playing without the ball to ice youthful Maritzburg United out of the Nedbank Cup final 1-0, and lift the trophy at Cape Town Stadium on Saturday night.

This was a final more captivatingly intense than attractive on the eye for either team’s prowess in attack, between two sides for whom a win would mean so much.

It was set up as contest between the youth and hunger of Maritzburg’s rising starlets, with a few older heads in-between, against the greater experience of the warhorse battlers of Stars.

United started all energy and dynamic movement in attack, and appeared to be wrestling the final their way.

Stars waited for their chance, and scored through Goodman Dlamini a minute into first-half added time in the fashion they had so often in this tournament – against the run of play. Then they absorbed Maritzburg out of the game.

The sponsors put on a fine show before kickoff, with shiny marching bands, fluorescent dancers and flames.

Most impressive, though, was the turnout. Somehow, by clubs providing buses, and fans paying from their pockets, the two teams had a moving turnout for a final where they could both make history. This especially considering their supporters had to travel 3000 kilometres either way to be there.

Neither coach saw reason to stray in their starting lineups from the formulas that have resulted in these two teams being the surprise packages of 2017-18, and saw Stars finish sixth in the Absa Premiership and Maritzburg an all-time high fourth.

Though United’s Fadlu Davids, at 36 the youngest coach in the PSL, did raise an eyebrow opting not to set out with his trademark three centrebacks.

Siyanda Xulu was at right-back, Bevan Fransman and Rushine de Reuck at centreback, and Pogiso Sanoka on the left, behind the hugely promising midfield and attack of Fortune Makaringe, Lebohang Maboe, Siphesihle Ndlovu and Andrea Fileccia.

The rousingly belted-out national anthem promised a fiery game. The opening 20 minutes, though, were understandably cagey.

Maritzburg looked razor-sharp in their buildups, but lost direction with the final pass.

By the half-hour, the game almost opened, the two teams running at each other, and also frantically snuffing each other out.

Fileccia finally let loose a first shot from range, high. Then, in the 37th, the first real chance, Deolin Mekoa’s free-kick glanced by Fransman and Ngobeni down to a sharp save.

Fileccia’s low cross was met by a sliding Maboe, unable to steer it at goal, as Maritzburg seemed to be edging it.

But Stars in all four previous games in this cup had won against the run of play. They scored in that vein when Ndlovu let the ball bounce instead of clearing in front of his area, Jantjie stole it and fed Dlamini, who curled a finish past Richard Ofori with relish.

Fileccia teed up Bandile Shandu early in the second half, who, in line with United’s youthful nervousness, struck wide.

Stars looked more composed on the ball, more patient, and more calm in their organisation in defence. They sat back on their lead, veteran captain Paulus Masehe imperturbable in defensive midfield, like a 40-year-old boxer against a novice.

It seemed to freak United out a little. A goal from Stars on the break and the game would be over.

Davids hoped Mxolisi Kunene, on for Mekoa in the 66th, the later Mohau Mokate for Shandu, could swing the momentum back.

And Xulu could have put the game into extra time with a minute left with an overhead kick from three metres going over.

But in the end the youngsters from KwaZulu-Natal, for all their endeavour, froze in the headlights. More accurately, though, Stars froze them out.

* Marc Strydom is in Cape Town as a guest of Nedbank

At first Sam Meyiwa did not believe the news he had just been told.
News
3 years ago

Fadlu Davids will take Maritzburg United into the Nedbank Cup final on Saturday as the youngest coach in the Premier Soccer League‚ having shown this ...
Sport
3 years ago

The Premier Soccer League (PSL) awards will be heldon Tuesday‚ May 29 at the Sandton Convention Centre‚ the league has announced.
Sport
3 years ago
Next Article