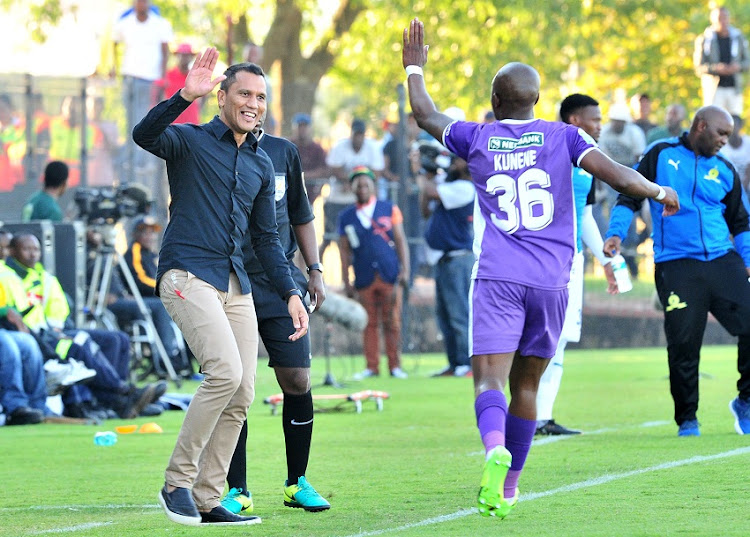 Fadlu Davids will take Maritzburg United into the Nedbank Cup final on Saturday as the youngest coach in the Premier Soccer League‚ having shown this season that he is both a quick learner and a student of the game.

Davids‚ 36‚ led the KwaZulu-Natal side to a club record fourth in the league and can cap a remarkable first full season as a head coach with a cup win over Free State Stars in Cape Town.

He reveals that his coaching philosophy is self-taught‚ and that he has made a point of educating himself on the latest trends in coaching over the last few years.

“I have always tried to empower myself‚” he told SowetanLIVE.

“I have been in Europe every off-season trying to do some sort of course and that is where I developed my own thinking and principles that will work for the local South African player.

“It is key that I do not have my own single philosophy and then you have all these players who must play the way I want them to play. No. It is about utilising the player‚ putting the player first and seeing what their strengths are and developing a player model so that they can display their skills.

“You cannot say‚ ‘OK‚ I have short players‚ but I want to play long balls. No – you have short technical players‚ so introduce a high intensity‚ skilful‚ penetration style that allows them to display their skills within a structure that is successful.”

Davids has led a young Maritzburg into the Nedbank Cup decider‚ in contrast to the vastly experienced Stars side they will come up against.

He says he is not worried about his team freezing on the big stage.

“It is always about managing the thinking of the players. Maintain your thinking for 90 minutes‚ don’t daydream for a few seconds‚ always be in the game thinking about your next action‚” the coach said.

“It’s a similar approach coming into the final. Take it as a normal game. For most of them it will be their first cup final‚ so to put too much pressure on them is the wrong way.

“They must take it as just another match against Free State Stars. Let’s play to our strengths and try to not worry about the result and put on a performance. Then the result will take care of itself.”

Maritzburg United have made a whistle-stop visit to Cape Town to drum up support for the side in Saturday’s Nedbank Cup final against Free State ...
Sport
4 years ago

Xulu relieved he has redeemed himself

One would be forgiven for believing that Siyanda Xulu has been around forever, but the Maritzburg United defender is still only 26 years old.
Sport
4 years ago

Free State Stars general manager Rantsi Mokoena has lost patience with the speculation over a potential next destination for his club's coach‚ Luc ...
Sport
4 years ago
Next Article