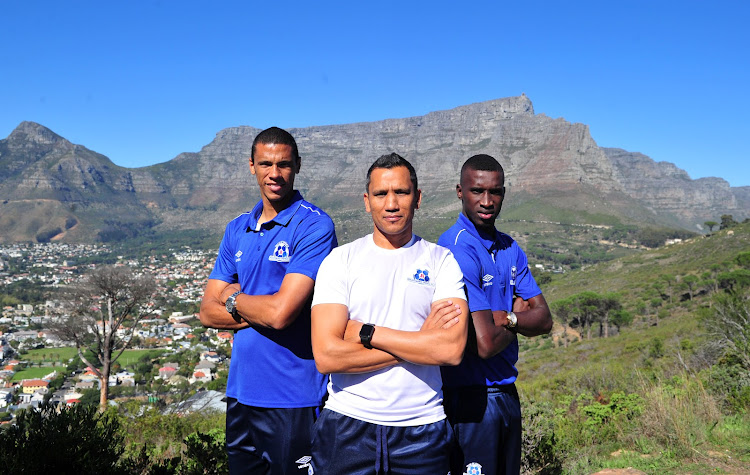 Fadlu Davids can round off a remarkable first full season as head coach at Maritzburg United by leading the unfancied KwaZulu-Natal club to a first-ever trophy in the Nedbank Cup final against Free State Stars in Cape Town on Saturday.

Davids‚ 36‚ the youngest coach in the Premier Soccer League‚ will lead a youthful side that lacks big match experience‚ but has plenty of skill‚ pace and enthusiasm against a much more seasoned and wily Stars outfit.

Having already taken the team to fourth place in the league‚ their best-ever finish‚ Davids can grow his burgeoning reputation even further with Nedbank Cup success.

The rookie coach says he knows exactly how the flow of Saturday’s game will go‚ and it will come down to who executes their plans best on the day.

“They are a counterattacking side‚ it is quite obvious we are going to have more possession and they are going to sit back and try and hit us on the counter‚” Davids said.

“They are a tough side‚ their defensive concept is man-to-man‚ so we are going to have to change our structure a little bit.

“I have heard their coach [Luc Eymael] say he has never lost to a 3-5-2‚ so maybe we will play that formation.

With young stars like Lebohang Maboe‚ Siphesihle Ndlovu‚ Fortune Makaringe and Bandile Shandu‚ there is a big experience gap between Maritzburg and Stars‚ who have a number of their key players such as Paulus Masehe‚ Rooi Mahamutsa‚ Patrick Phungwayo and Siphelele Mthembu that are into their 30s.

“Some of our players are in their first season in the PSL‚ others only in their second season. We have a lot of young players‚ so we are going to need the Bevans [Fransman] and the Siyandas [Xulu] to play the calming effect‚” Davids said.

“We learnt our lesson when we lost the semifinal [of the MTN8] against SuperSport United. We went through an eight-game winless run in the league after that‚ so it was a tough learning curve.

“But we have come on – we beat Sundowns [3-1] when we managed to get to second semifinal [in the Nedbank] and now we are in the final.

“It is an occasion we have to enjoy and not put too much pressure on ourselves as players‚ the technical team and the club. We should enjoy the moment.”

Cape Town will be hosting the final for the first time since Santos beat Ajax Cape Town 2-0 in 2003‚ the only other occasion the Mother City has staged a decider.

For Maritzburg‚ there are strong links to the city and Cape Town-born Davids hopes that this will see locals turn out in support of KwaZulu-Natal club.

“Maritzburg have always had Cape Town-born players‚ since the Federation [1970s all coloured and Indian league] days. They have always gone to look for players in Cape Town‚ so there is a special affinity between the club and the city‚” he said.

“For those of us born and bred here‚ it is really something special. Looking up to Santos‚ Cape Town Spurs and then when Ajax were formed‚ seeing them play in these finals.

“I was with Santos when they won the BobSave final‚ not playing but being part of the squad. So to play a part in this final in Cape Town will be very special for all of us in the team.

“Let’s hope the Cape Town City‚ Ajax Cape Town‚ Kaizer Chiefs and Orlando Pirates fans can adopt us for one day and come out and support us.

“We want everybody in the stadium to wear the Western Province blue to support Maritzburg United.”

Stars have played in five previous cup finals‚ but have only a single success to show for that‚ a 3-2 victory over Cape Town side Hellenic in the 1994 Coca-Cola Cup.

They appeared in the Nedbank Cup competition that same year‚ but succumbed to a 1-0 loss to Vaal Professionals.

Eymael has created a lot of noise about where he won’t be coaching next season‚ constantly denying links with other clubs‚ but he has undoubtedly done an excellent job to turn around the fortunes of a club that has been battling relegation in the last few seasons.

Having already claimed a place in next year’s MTN8‚ he could cap his excellent campaign with the Nedbank Cup that would be likely to have even more suitors knocking on his door.

His assistant‚ Sly Mosala‚ believes his side’s greater experience will be key‚ and that for fans it will be an entertaining tactical battle.

“The experienced guys have this week been helping to motivate the youngsters‚ to keep them calm ahead of the final. I can assure you that this is going to be a cracking match‚” Mosala said.

“Maritzburg and Stars are the two teams that have improved the most in the PSL and both like to use the ball.”

At first Sam Meyiwa did not believe the news he had just been told.
News
3 years ago

Fadlu Davids will take Maritzburg United into the Nedbank Cup final on Saturday as the youngest coach in the Premier Soccer League‚ having shown this ...
Sport
3 years ago

The Premier Soccer League (PSL) awards will be heldon Tuesday‚ May 29 at the Sandton Convention Centre‚ the league has announced.
Sport
3 years ago

Judge Raylene Keightley has reserved judgment in the urgent application by Ajax Cape Town to have the Premier Soccer League Promotion/Relegation ...
Sport
3 years ago
Next Article