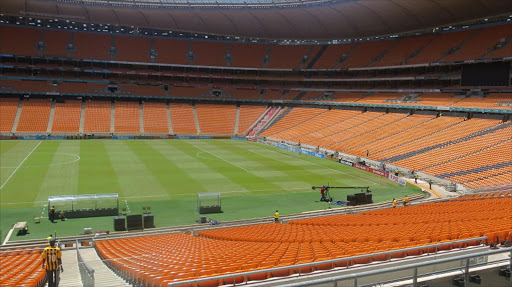 A security operation will be mounted in and around FNB Stadium to ensure a safe atmosphere when the venue hosts the high-profile international club friendly between Mamelodi Sundowns and Spanish powerhouses Barcelona on Wednesday night.

The match is expected to get underway at 6.15pm and Jacques Grobbelaar‚ the CEO of Stadium Management SA‚ said over 1 600 security personnel would be employed to direct the over 87 437 fans who have bought tickets for the eagerly-anticipated encounter.

Lionel Messi is here! Excitement as @FCBarcelona arrives at @ortambo_int in Johannesburg ahead of their @Masandawana clash. Video courtesy: @BraMahlatse #SundownsBarça pic.twitter.com/zWHcwTr3ZT

“We have spent approximately R900,000 on security as all tickets were sold out by Monday‚” said Grobbelaar.

The event is one of the main highlights of the Nelson Mandela centenary celebrations taking place this year.

With the who’s of who of world football‚ politicians and top class celebrities expected to grace the event sponsored by the Motsepe foundation‚ Grobbelaar said security was paramount and they would not take any chances.

“Recently there have been a lot of incidents in our stadiums around the country‚ including FNB Stadium. We urge supporters to come in early as the gates open at 10 am.

“We will also encourage supporters to use the park and ride shuttle services that will be deployed to ferry fans to the stadium.

“We do have limited space of parking at the stadium and those wanting it must go and buy at Computicket.

From 4pm the entertainment will start at the stadium with Kwesta and Cassper Nyovest among the artists expected to get the fans into the groove.