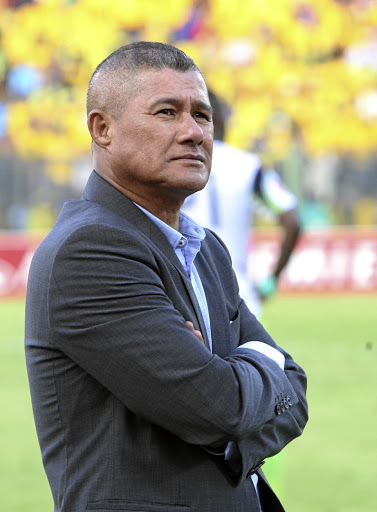 Having started their preparations late after buying the status of Thanda Royal Zulu at the start of the just-concluded season, AmaZulu surprised many by finishing in the top eight.

Usuthu beat Cape Town City 1-0 in the league's final programme on Saturday, ensuring they finished eighth on the standings.

Captain Mbongeni Gumede scored the all-important goal as Usuthu made it three KwaZulu-Natal representatives in next season's MTN8 line-up with Maritzburg United and Golden Arrows.

AmaZulu coach Cavin Johnson and his side achieved this feat despite him only being hired five days before the start of the season.

"We had players who did not have Premiership experience but rose to the occasion. Their hunger was very important for us to finish this season in the top eight," Johnson told Sowetan yesterday.

"Those players used the platform very well as they gave their all for the club. I am speaking about players like goalkeeper [Siyabonga] Mbatha and the boy I signed from North West [Sibusiso Mabiliso, from Platinum Stars].

"[Mabiliso] was very influential in the left-back position. It took us a lot of hard work but all-in-all it was a team effort because I cannot forget about the contributions of experienced players like [Mabhuti] Khanyeza.''

AmaZulu have not wasted any time in preparing for the upcoming season after signing playmaker Nhlanhla Vilakazi from Free State Stars.

The Usuthu coach also said they were yet to decide the future of seasoned striker Siyabonga Nomvethe, whose contract is expiring at the end of June.

"That has not been discussed yet. In fact we have not finished the season yet, we will finish the season this week as far as the technical team is concerned," stated the 59-year-old mentor.