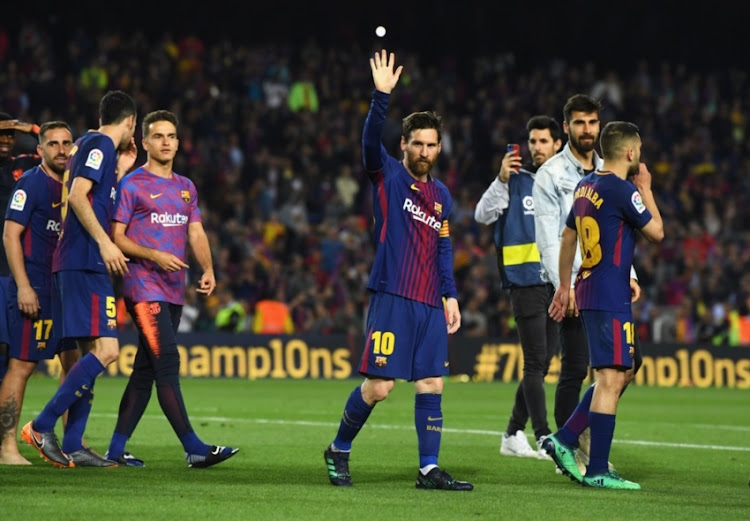 Lionel Messi of Barcelona shows appreciation to the fans after the La Liga match between Barcelona and Real Madrid at Camp Nou on May 6, 2018 in Barcelona, Spain.
Image: David Ramos/Getty Images

Is Lionel Messi coming to South Africa or isn't he?

That is the biggest question on the nation's soccer lovers' lips ahead of the high-profile club friendly between recently crowned SA champions Mamelodi Sundowns and Spanish powerhouses Barcelona at FNB Stadium on Wednesday night.

Barcelona are yet to confirm their squad for the Nelson Mandela Centenary Cup against Sundowns but indications are that their Argentinean superstar will make the trip to SA.

The two teams have not given a definitive answer to questions about Messi’s availability for this clash but he is expected to play some part in a match that has been listed by Barcelona as part of their training schedule for the week.

It also doesn't help that Sundowns officials are reluctant to even mention Messi's name in the buildup to the friendly encounter.

“Barcelona have agreed to bring their best possible squad for this match‚” Sundowns spokesperson Thulani Thuswa said on Tuesday.

Insiders at the club told SowetanLIVE that Messi is part of the package that was agreed to during the negotiations for the match and he will be in SA with superstars like Philippe Coutinho‚ Ousmane Dembélé‚ Luis Suárez‚ Sergio Busquets‚ Gerard Piqué and Jordi Alba.

“The last time Barcelona were in South Africa to play against Sundowns‚ Ronaldinho was here and he was the biggest star in the world at that time‚" said an insider.

"He was part of the deal and it is the same with Messi now.

"He will be here but how long he is going to play is the decision of the coach.”

Sundowns president Patrice Motsepe could not confirm the names of the Barcelona players who will travel to SA when he announced the match last week.

“It is still confidential information at the moment‚ but there is a contract in place that stipulates which players will be coming for this fixture‚” he said at the time.

Messi was rested by manager Ernesto Valverde last weekend when Barcelona suffered a shock 5-4 defeat to Levante in a penultimate La Liga match of the season that saw ambitions of ending the campaign unbeaten go up in smoke.