Sundowns to put on show of strength against Barcelona 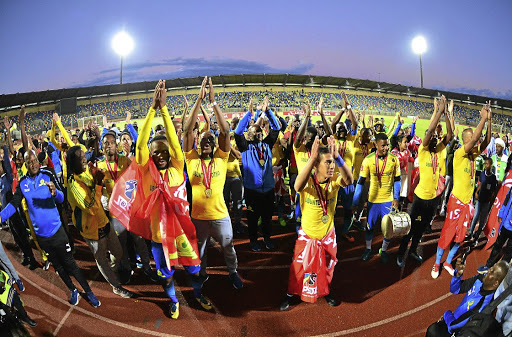 Mamelodi Sundowns players and staff acknowledge the fans after the Brazilians were officially crowned Absa Premiership champions following their match against Bloemfontein Celtic on Saturday at Mangaung.
Image: Samuel Shivambu/BackpagePix

It's now time for Mamelodi Sundowns to show the world what they can do after conquering the domestic scene.

Eighteen months ago, Sundowns fell short on the world stage. They were beaten 4-1 by South Korean side Jeonbuk and 2-0 by Japan's Kashima Antlers at the Fifa Club World Cup. This was after they won the CAF Champions League.

Now giants Barcelona are here, just a few days after the Brazilians won the Absa Premiership, and are also in the group stage of Africa's premium club competition.

Sundowns mentor Pitso Mosimane, speaking after their official coronation at the Dr Molemela Stadium on Saturday, said he will field his strongest side against the Spanish side at FNB Stadium on Wednesday [6.15pm].

"The Barca game is for the guys to get experience and to see how far we've gone; what's the level and the difference between us and Barca - the PSL and La Liga or African and European football," Mosimane said after their last match of the season.

"For me personally, it's to see how far our tactics are in relation to Barca and of course you are not going to stop Barca from playing. Nobody has stopped Barca from playing and even against Real Madrid, they scored two goals [during their 2-2 draw earlier this month].

"They scored five last week in their last match against Villarreal . You can't have stress and you are happy to play. Let's see how long we can last before the first goal comes. Let's see our organisation; the way we defend and attack. Maybe the difference is between the rand and the euro."

Sundowns may be the underdogs, but "Jingles" said that the Catalan outfit, who may take it easy considering their season is still on, will have to deal with the motivated hosts.

"If we play the Sundowns way, you know Sundowns, can Barca stop Sundowns in those principles of attack? It's all about that, because I think you know who will win.

"I think we expect Barca to win, to be honest [and] not to say we don't have confidence, but the reality has to be there. If we win, it's unbelievable," Mosimane said.