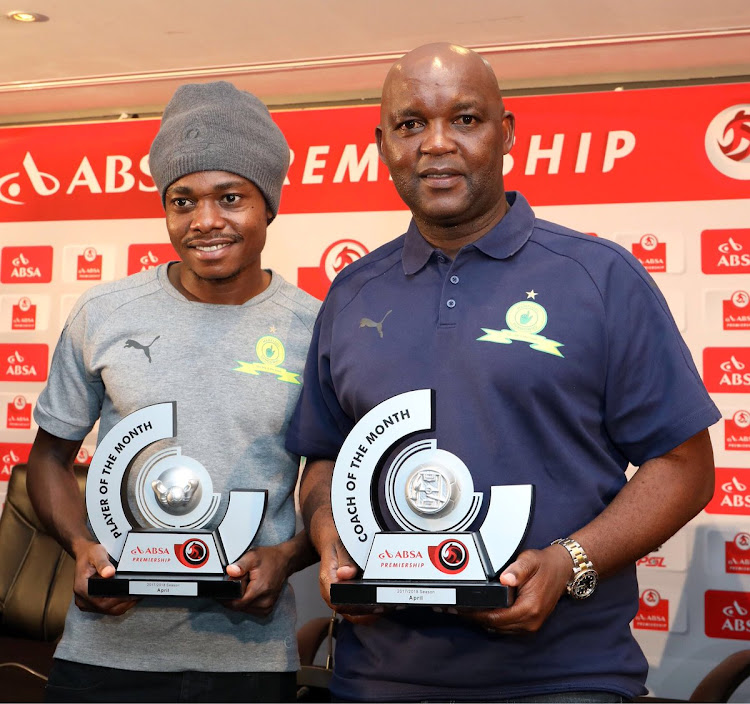 Mamelodi Sundowns coach Pitso Mosimane says the adjudicators of the end-of-the-season Premier Soccer League awards should look no further than Percy Tau for the prestigious Footballer of the season gong.

The pint-sized forward has been at the heart of everything good the recently crowned premiership champions Sundowns have done this season.

Sundowns may only have one trophy to show for their efforts this season but it's the league marathon that they've claimed.

Such has been the dominance of the Chloorkop-based side under Mosimane's six year tenure that they are yet to finish outside of the top two and every time the title has been wrested from them‚ they've prised it back in no uncertain terms.

Mosimane said Tau's statistics this season speak for themselves and there hasn't been a player who has come close to matching his consistency and excellence.

“The player of the season is next to me‚" Mosimane said nodding to Tau.

"He's scored 11 goals and has 11 assists and has contributed 45 percent of the 49 goals we've scored this season.

"He played every Wednesday when other people were resting‚ played for the national team and was never out of the game because of fatigue or injured and was always consistent with his tempo.

"He didn't always convert his chances but played under high pressure.

“If there's any player who can match his statistics and contribution‚ I can consider that person as the player of the season.

"If you want to put any player in this position‚ let's talk about these principles that I've raised.

"You'll see that your list will get smaller very quickly. I'm talking about the player of the year.”

Mosimane coaches Tau at club level and this means he can't vote for him at the end-of-the-season awards.

Mosimane though said there were other players at different clubs like Kaizer Chiefs' goalkeeper Itumeleng Khune and Maritzburg United's Siphesihle Ndlovu who have won his vote.

However‚ none of them come close to Tau and what he's produced for Sundowns in Mosimane's eyes.

“I've voted for Itumeleng Khune because he's kept plenty of clean sheets and he's a goalkeeper of a team where he had to work hard to ensure they don't lose.

“I'm happy with the league trophy but what's important for me is that Percy Tau is the player of the year and that's been our plan. If players don't fit into those categories then so be it.”