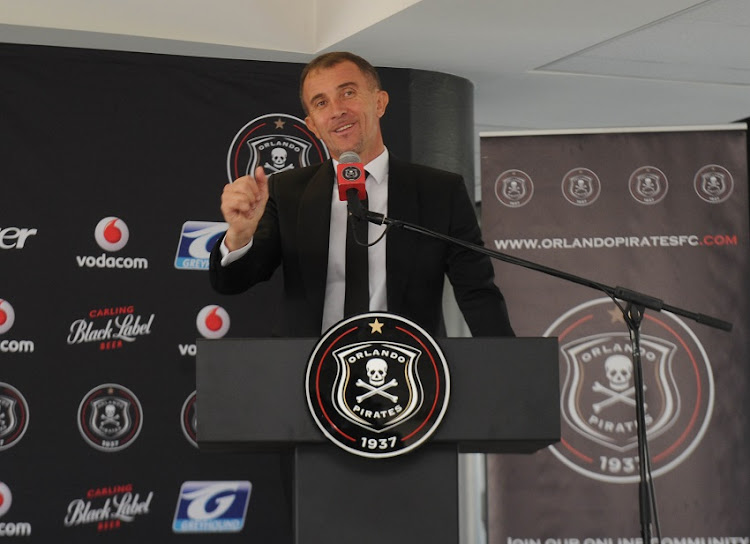 Orlando Pirates coach Milutin Sredojevic has dismissed suggestions that his team will have some sort of advantage over Absa Premiership champions Mamelodi Sundowns next season.

Sredojevic‚ who propelled Bucs to their best league finish (second place) since 2012‚ will see Sundowns starting next season still busy in the group phase of the African Champions League.

But the Serbian coach does not believe that this will give his side any benefit in the early rounds of the 2018/2019 Absa Premiership season.

“I have the highest degree of respect for Sundowns‚” said Sredojevic whose side will entertain Free State Stars in their last league match of the season at Orlando Stadium on Saturday.

“I believe that Sundowns being in the Champions League will not have positive impact on us or any other team.

“Sundowns are a very competitive team and they are now used to playing in the Champions League.

“They have pushed their benchmark very high. For us to reach their level and outmuscle them will take a lot of effort.

“You can’t talk about a two-horse race when you talk about next season.

"For us every single opponent in all five competitions we will be involved in next year‚ we will have to give our utmost respect.”

Last season Bucs had their worst-ever season‚ finishing 11th on the log. But this time‚ in the first season of Sredojevic’s second spell‚ they ensured qualification for the 2019 edition of the African Champions League by finishing second behind Sundowns.

With the 2019 Champions League starting in December as CAF are phasing out the February to December calendar and moving to August/May calendar‚ PSL fixturers will be way too congested‚ giving no breathing space to all SA teams that will be competing in CAF club competitions next season.

Sredojevic admitted they will have to sign more players to compete in five competitions next season but said getting quality will always prove a difficult task.