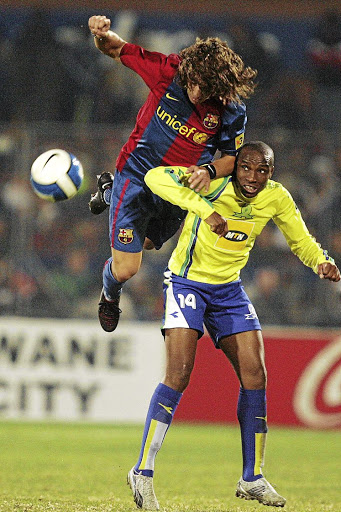 The expected high-profile friendly between Absa Premiership champions Mamelodi Sundowns and La Liga kings Barcelona next Wednesday at FNB Stadium will benefit the Brazilians in their quest for continental supremacy.

This is the sentiment of retired Sundowns attacking midfielder Surprise Moriri, who was on target when Barca beat the Brazilians 2-1 the first time these two sides met at Loftus Versfeld Stadium in 2007.

"This match came at the right time for Sundowns as they are busy with their CAF Champions League campaign. It is not every African team that can get a chance to play Barcelona, so this match will benefit Sundowns, especially because they want to win their second Champions League this year," Moriri said yesterday.

"This is a massive platform for the likes of Percy Tau to test their capabilities against the best. You need to play games of this magnitude to be counted among the best. I think coach Pitso [Mosimane] will also use this match to prepare for the Club World Cup, just in case they win the Champions League."

Moriri is still nostalgic about the goal he scored against the Spanish giants 11 years ago. He urged Mosimane's troops not to be intimidated by mega- stars such as five-time Ballon d'Or winner Lionel Messi.

"I was very proud [after scoring against Barca]. I always feel like it was yesterday. They must play their normal game and not be intimidated by playing against Messi. Anything is possible, I think Sundowns have a chance to upset Barca this time around," said Moriri, who now serves as the Brazilians' reserve side assistant coach.

Sundowns were yesterday granted permission by the PSL to go ahead with the tie. However, the eight-time Absa Premiership champions must also get permission from the Confederation of African Football (CAF) to postpone their next Champions League clash away to Horoya of Guinea, which was planned for next Tuesday.

Barcelona are also yet to make any announcement regarding this showdown.

Sundowns president Patrice Motsepe attended the El Clasico between Barcelona and Real Madrid at the Nou Camp on Sunday night.