'Beer cup' derby on ice due to World Cup 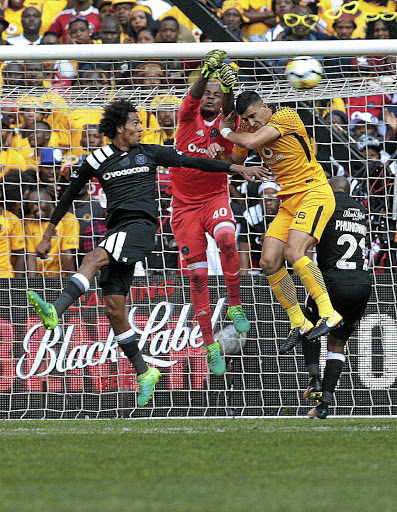 Pirates' Issa Sarr jumps for the ball along with Siyabonga Mpontshane in last year's Carling Cup, while Chiefs' Lorenzo Gordinho is close by. The pre-season derby has been shelved for this year. / Veli Nhlapo

The money-spinning Carling Cup between Orlando Pirates and Kaizer Chiefs has been shelved for this year due to the World Cup, Sowetan has confirmed.

The popular pre-season event, which saw fans select starting XIs for both Soweto giants via SMS after purchasing Black Label beer, usually takes place at the end of July.

But it won't happen this year due to "contractual obligations" related to the World Cup that kicks off in Russia next month.

"A decision has been made not to have the Carling Cup this year because AB InBev [the parent company of Carling makers SABMiller] have some obligations to fulfil at the World Cup," said Jacques Grobbelaar, the chief executive of Stadium Management SA, which has hosted the pre-season derby - also known as the Beer Cup - at FNB Stadium in the past eight years.

"This year the World Cup would have had an impact on their plans. One of their brands, Budweiser, may also have been affected as they are a World Cup sponsor," he explained.

The decision seems curious given that the Carling Cup has been taking place since 2011 and was still staged two weeks after World Cup 2014 in Brazil, where Budweiser was one of the sponsors as well.

Speculation has been rife that AB InBev may have been dissuaded by the negative publicity that accompanied last year's event, where two people perished in a stampede at the venue, and scores others were injured.

But Grobbelaar maintained shelving the event had nothing to do with the controversy.

"Already before last year's event, we were in talks about not having the Carling Cup this year because of the World Cup. So no, the incident [stampede] is not the reason. It's purely for commercial purposes. The Carling Cup will definitely be back next year."

The gap will be filled by a new pre-season event featuring Chiefs and Mamelodi Sundowns, also at FNB Stadium, on July 21, known as the Shell Helix Cup.

"Chiefs and Sundowns will field their strongest teams possible. The Shell Helix Cup will run for the next three years, but it won't use the Carling Cup format where fans vote for teams," Grobbelaar said.

SABMiller promised to comment on the development but had not done so at the time of going to print.