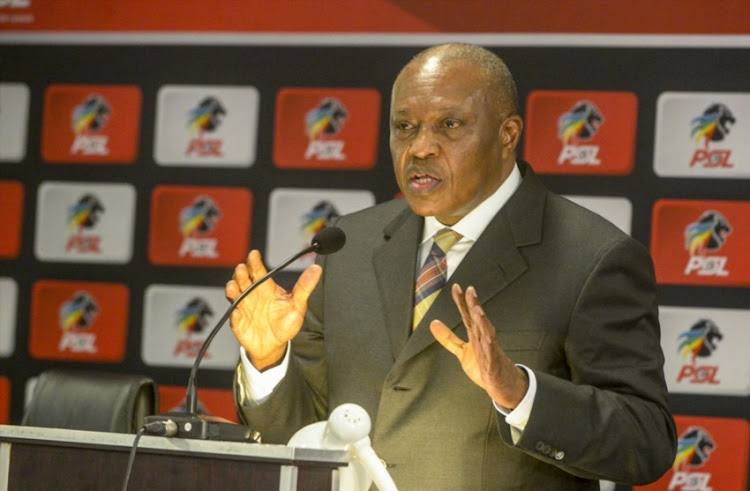 Chairman Irvin Khoza of the PSL addresses a meeting of the league's cubs during the Premier Soccer League media conference at Southern Sun OR Tambo International on April 16, 2018 in Johannesburg, South Africa.
Image: Sydney Seshibedi/Gallo Images

Premier Soccer League (PSL) chairman Irvin Khoza has indicated that he does not want a war in football sparked by the allegations that were made against him by South African Football Association (Safa) president Danny Jordaan.

Khoza called a press conference at the PSL offices on Thursday last week to refute allegations amidst a case opened by Jordaan at the police of defamation‚ criminal collusion and conspiracy against the PSL chairman.

Allegations were made that Khoza was the catalyst in a rape case opened against the Safa president last month by singer and former ANC MP Jennifer Ferguson.

Ferguson‚ who lives in Sweden‚ laid the rape complaint with the South African Police Services (SAPS) in Parkview last month.

Allegations were that Khoza had paid for Ferguson's flights and accommodation to south Africa through a third party.

Jordaan‚ however‚ has apparently been caught offside as evidence has since emerged that he allegedly used “falsified and fraudulent documentation” to open the case of defamation .

Ferguson has produced documents to show that her true previously anonymous donor for her trip to SA to open her rape case was an Mpumalanga-based non-governmental organisation‚ The Forgotten Angle Theatre Company‚ via Swedish travel agent Big Travel.

As Jordaan's allegations have apparently been debunked the entire affair still threatens to plunge SA football into a state of war‚ and jeopardise the crucial thawing in relations and greater cooperation that had been seen over the past few years between Safa and the PSL.

Khoza‚ also chairman of Orlando Pirates‚ told his press conference last week that he remembered that Jordaan was the Safa official who travelled to Ivory Coast with the Buccaneers when they beat Asec Abidjan to win the Caf Champions Cup in 1995.

"It is a matter that has affected Dr Danny Jordaan‚ who is in football‚ and I'm in football. It can never be a matter devolved from football‚" Khoza said.

"But at a personal level‚ because I understand the objective‚ the agenda of what needs to be achieved by football in this country with regards social cohesion‚ it's important that I always make sure that I reserve myself‚ and make sure that the course of football is championed‚ more than my personal interest and personal feelings.

"At that time [in 2009‚ when Khoza was accused of an alleged coup against then-2010 World Cup Local Organising Committee CEO Jordaam]‚ when I did not respond‚ it was an issue of the World Cup as a national priority.

"This time around it's very important to clear this matter once and for all - it cannot keep coming up.

"It can't be right for football. Because I don't want to be used as a scapegoat‚ that there is a problem in football‚ and the problem is Khoza and Danny.

"It can't be. We sat down with Danny. We have achieved so much‚ the two of us.

"I respect him as an administrator. I've done so many things with him that are very positive.

"And I never remember him and me fighting openly on any issue. Except one incident on the [Safa] executive committee when there was a difference of opinion. And only once.

"So there's so much that we have achieved that should be protected. There's no way that we can afford for what has been achieved to be destroyed."