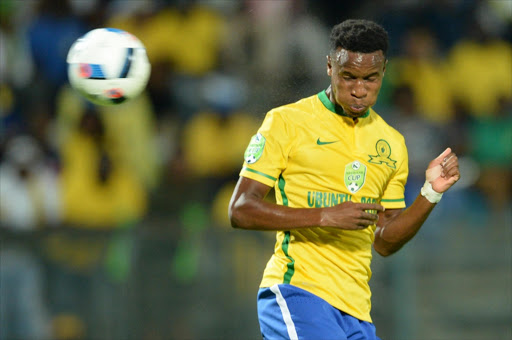 Percy Tau might have been Mamelodi Sundowns' star of their third league title in five years‚ but Themba Zwane deserves credit too according to Brazilians forward Anthony Laffor.

Sundowns wrapped up their eighth league title with a 3-1 win against Ajax Cape Town on Saturday.

Asked who he believed were the standout performers of Downs' third championship under Pitso Mosimane‚ Laffor singled out striker and joint PSL top scorer Tau and winger Zwane.

“People talk more about Percy Tau. He's a good player and I like his energy and everything‚ but the one thing people forget about is Themba Zwane‚” Laffor said.

“I think this season he's been our secret weapon. Everything that he plays he either creates or scores goals and I'm not saying that Percy didn't do well for us.”

“For me I think it would be Percy Tau and Themba Zwane. Those two guys have given it their all.

“So all of them have done extremely well. But I put my hands up for Themba Zwane and Percy Tau.”

Laffor said the current generation of Sundowns players‚ 2016 Champions League winners‚ are creating a legacy to be remembered at the club.

“Winning the league for the eighth time‚ and for me I think this is the third time with Sundowns‚ I think it's a good achievement for the club and for the players. Because everybody wants to play football for a legacy‚" he said.

“Ten‚ 15 years from now‚ everyone's going to talk about our generation who won the Champions League for Sundowns‚ who won the league three times.

“I'm glad to be part of that group. It's wonderful. We just need to keep our feet on the ground‚ and now concentrate on our Champions League game.”

Sundowns set for a second clash against Barcelona

This will be the second meeting between the two sides.
Sport
3 years ago

Premier Soccer League champions Mamelodi Sundowns have strengthened their squad by signing Toni Silva‚ who last played for Levadiakos in the Greek ...
Sport
3 years ago
Next Article