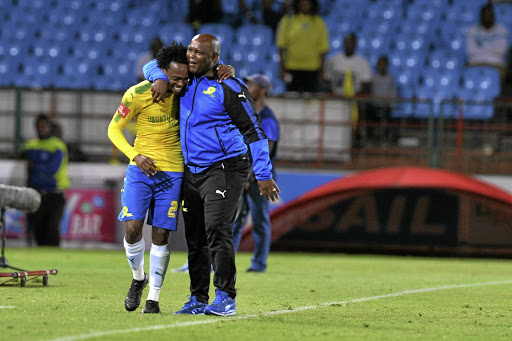 Percy Tau is celebrating having been picked among the world’s 500 most influential footballers for 2018 by the globally respected World Soccer Magazine.

While the list was published in World Soccer’s March edition‚ it must have only come to the emerging Bafana Bafana and Mamelodi Sundowns star’s attention recently.

Tau‚ the joint-top scorer in the Absa Premiership with 11 goals‚ favourite for PSL Player of the Season for 2017-18‚ and who wrapped up his first league title with Downs this past weekend‚ posted photos of the World Soccer listing on Twitter on Wednesday.

In no order‚ Tau’s name appears on page 64 of the latest edition of World Soccer‚ in the list of 500.

The magazine wrote of the rising 23-year-old South African talent: “The star of Mamelodi Sundowns' 2016 African Champions League triumph is attracting a lot of interest from Europe and could leave South Africa this summer.”

Tau is one of 44 African players on the list. Only four of those – Tau‚ Egyptians Shikabala of Zamalek and Ahmed Fathi of Al Ahly and Tunisia’s Ayoub El Kaabi of RS Berkane – are based in Africa.

Tau scored a scorching goal for Downs – their only goal in their two matches of the tournament – at the 2016 Fifa Club World Cup in Japan in 2016‚ in the Brazilians’ 4-1 defeat against Jeonbuk Hyundai Motors.

He scored another fine goal for Bafana in their 2-0 2019 Africa Cup of Nations qualifying win against Nigeria in Uyo in June last year as his international reputation has burgeoned and a move to Europe beckons.