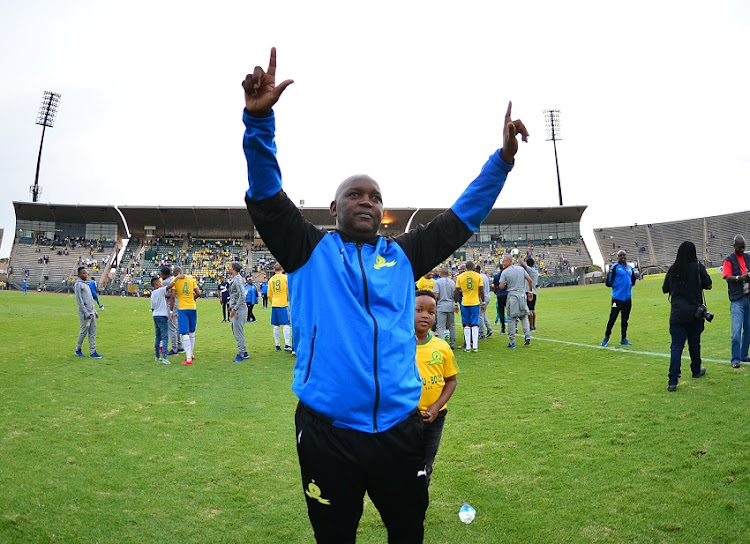 Mamelodi Sundowns were the only team who said they wanted the Absa Premiership title‚ and so they won it‚ coach Pitso Mosimane has said.

Sundowns’ dream is to be regain the Champions League title they won in 2016‚ which they ceded going out against Moroccan giants Wydad in the quarterfinals last year‚ and return to the Fifa Club World Cup.

Doing that will mean maintaining the punishing four-year schedule of having no off-season to fight on three fronts – the Champions League‚ PSL and domestic cups.

That exhausting programme finally saw Downs collapse to a slump in the PSL after losing against Wydad on penalties in September.

The Brazilians went into a mini-slump‚ losing three league and cup matches in a row. But they recovered quickly to hit full throttle again‚ winning 15 of their next 23 PSL games‚ drawing five and losing three to see off a strong challenge from second-placed Orlando Pirates and regain their 2015-16 championship.

“It’s been four years. For four years we have tried to keep the quality the same‚” Mosimane said.

“The pressure that gives to the players‚ the pressure on Sundowns to win. You have to win.

“We were the only ones who said it.”

Kaizer Chiefs said they wanted to win the title but‚ given the benefit of hindsight‚ and how their season imploded at the end‚ their challenge was never so serious.

The other two teams in the top five‚ Maritzburg United and Free State Stars‚ have been just happy to be there.

Mosimane said Sundowns’ aim is to go back to the Club World Cup‚ this year in United Arab Emirates in December‚ to improve on their two defeats (2-0 against Japan’s Kashima Antlers‚ and 4-1 to Korea’s Jeonbuk Hyundai Motors) in Japan in 2016.

“Ja‚ but the Club World Cup‚ can you win it? It’s very difficult‚ hey‚” Mosimane cautioned.

“I don’t think an African team can win the Club World Cup within the next four or five years. It’s not possible.

“And I always say that if I could I would put you guys [the media] on the flight‚ and then we all go and just experience media at another level at the CWC.

“Just to give different write-ups and everything that’s happening on the other side‚ rather than the normal thing that you do.

“And people must enjoy and see how it’s done there.”

Sundowns are in this year's Champions League Group C with Wydad‚ Togo's AS Togo-Port and Guinea's Horoya.