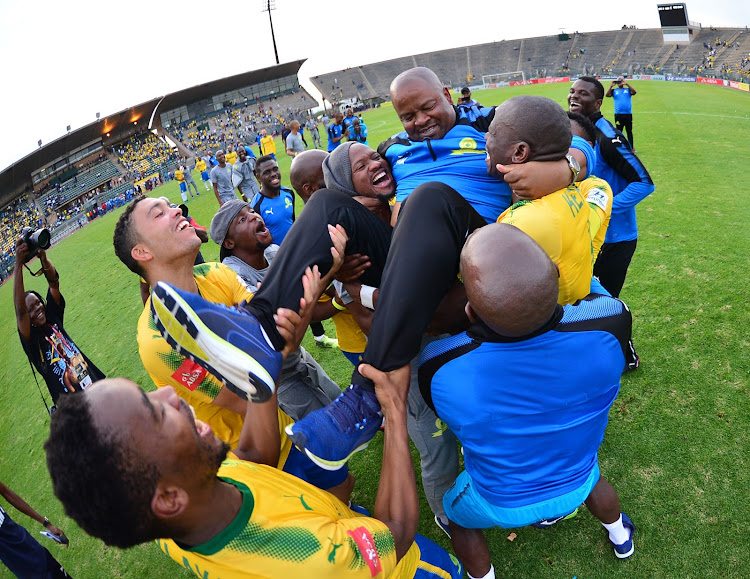 The Mamelodi Sundowns machine - the finest team seen in the Premier Soccer League era - are Absa Premiership champions again, wrapping up the title with Saturday's 3-1 victory over Ajax Cape Town at Lucas Moripe Stadioum in Atteridgeville.

Second-placed Orlando Pirates' 1-0 defeat away against Cape Town City meant Downs were champions with a match to spare, and with a lead of seven points, also no longer need to have the Tendai Ndoro eligibility matter in their minds either.

Downs' now-trademark wall of beautifully singing mellow yellowers in the open stand sipped in the sweetness of a second league title in three years, following that of 2015-16. The players, as they, have all season, danced in front of their fans after the final whistle.

Sundowns now, as is their modus operandi, will turn their attention of repeating 2016's feat of going on to become African champions, and going back to the Fifa Club World Cup.

Downs, trying to establish themselves as the Barcelona of Africa, richly deserve this title.

This campaign, shortly after losing against eventual 2017 winners Wydad Casablanca in the Champions League quarterfinals, Downs finally did collapse into a slump as a result of three years' campaigns across Africa.

But they recovered, and in the second half of the season - as the PSL caught fire too, with some spectacular matches and goals being scored, and Pirates laying on a challenge - the yellow machine hit full throttle again.

Sundowns had to fight to quell desperate Ajax's spirit in the first half.

The Brazilians conceded a soft opener when Grant Margeman's corner was allowed to dribble through their area to Mosa Lebusa, who slotted a 1-0 lead for the visitors.

Straight away Downs found their stride, as in the 10th a punt upfield from Denis Onyango found Percy Tau alone with Morne Nel, who he easily outstripped but slid an attempted finish past the upright.

Sundowns equalised as Tau left another defender - scorer Lebusa - sprawled down the right then crossed, Billiat acrobatically volleying in at the far post.

That rattled Downs as Themba Zwane's stray pass in his half found Fagrie Lakay. The home side won the ball back and turned the defensive situatiuon into a scoring one, finding Billiat alone in the area to be clattered down by Jody February.

Nascimento's penalty was low to the right of the Ajax goalkeeper, who got a touch, but could not stop the goal.

The Brazilians muscled the strike that would surely kill Ajax's spirit, walking through down the left, Zwane feeding Vilakazi in the middle, who turned, fashioned space and rolled a finish past February.

That Ajax had been broken seemed verified by coach Muhsin Ertugral bringing on Samuel Julies for Isaac Nhlapo before the break to switch from three centrebacks to two.

Sundowns, after half time, were only concerned with managing the game.

And in so doing, goals could come too. Before the hour Tau forced a save from February, from successive rebounds Zwane seeing a shot blocked and Billiat finding the recovered keeper.

Then Downs shut down the game, and won themselves the title.

The Premier Soccer League has asked FIFA to re-look at the Tendai Ndoro case and refer the matter to a judge of the Players’ Status Committee for a ...
Sport
4 years ago

The Mamelodi Sundowns machine - the finest team seen in the Premier Soccer League era - are Absa Premiership champions again, wrapping up the title ...
Sport
4 years ago

Khumalo to be the man in charge of team’s last two matches.
Sport
4 years ago

Gustavo Paez and Dumisani Zuma goals helped a wounded Kaizer Chiefs repair some of its dented pride as they beat an on-form Maritzburg United in a ...
Sport
4 years ago
Next Article