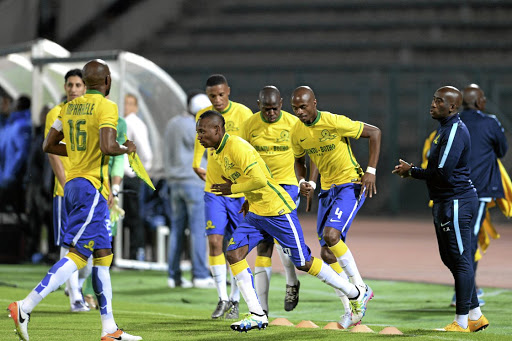 Mamelodi Sundowns will try to clinch the Absa Premiership title by beating Ajax Cape Town on Saturday‚ celebrate if they do‚ then leave what happens in the boardroom to the powers that be‚ Downs coach Pitso Mosimane has said.

The Brazilians can go to an unassailable four points clear of second-placed Orlando Pirates‚ who meet Cape Town City at Cape Town Stadium‚ with a match left‚ should Downs win against Ajax at Lucas Moripe Stadium on Saturday.

There is‚ though‚ the matter of the ongoing eligibility case over Ajax striker Tendai Ndoro. Should that case – to do with Fifa rules that a player can only turn out for two clubs in a season – play out in a certain way Pirates could be awarded three points for a 3-0 defeat under protest against Ajax in January where Ndoro was fielded against the Buccaneers.

Sundowns could ensure that even that scenario will not affect them if they win both of their last two matches – they meet Bloemfontein Celtic at Dr Molemela Stadium on their final game on Saturday‚ May 12.

Asked about the potential of the Ndoro matter impacting on the title‚ Mosimane said: “It has been pending for all the time‚ am I right? We want to win it on the pitch.

“If you win it on the [board room] table‚ ah good luck. I mean‚ what are you going to do now?

“It’s in our hands. So we have to win on the weekend‚ and then we celebrate. What happens after that is other people’s stuff.

“I mean really‚ what do you really want? If you lose the league on the table‚ can I really get upset? No‚ I can’t get upset.”

Sundowns could have wrapped up the championship with two games to spare‚ but were held to a 2-2 draw by Maritzburg United at Harry Gwala Stadium on Wednesday night‚ as Pirates beat Bidvest Wits 4-0 at Orlando Stadium.

It was Downs’ second game that they could not win in Pietermaritzburg in four days‚ having been stunned 3-1 by in-form United in a Nedbank Cup semifinal on Sunday.

Mosimane felt his team improved dramatically in the second match.

“I was very happy. The players worked hard. We showed integrity‚” the coach said.

“We close the angles‚ we pressed them – we did everything. We just showed that we are not what I like to call an ice cream team.

“An ice cream team is that one that only plays nice. We can grind when we need to grind.

“And you’ve got to understand that Maritzburg have played less than us. We played Arrows in midweek [before the semi against Maritzburg‚ where Sundowns won 1-0 at Loftus Versfeld]. Maritzburg had not played in 10 days.

“And they are a younger team. So you’ve got to accept that and respect that.”

Sundowns beat Ajax 2-1 in the first-round match in Cape Town.

The Urban Warriors need a win as much as Downs do‚ or even more‚ to escape the second-last‚ promotion/relegation playoff position they currently occupy.

The Premier Soccer League has asked FIFA to re-look at the Tendai Ndoro case and refer the matter to a judge of the Players’ Status Committee for a ...
Sport
4 years ago

Baroka FC coach McDonald Makhubedu has warned his players they could still be sucked down into the Absa Premiership’s relegation zone if they do not ...
Sport
4 years ago

SuperSport United lives to fight for another day in their battle to avoid the dreaded play-offs.
Sport
4 years ago

Orlando Pirates made their trademark crossing of the wrists sign to empty stands ahead of beating Bidvest Wits in the Absa Premiership‚ coach Milutin ...
Sport
4 years ago
Next Article