Pirates being back in the Champions League is normal‚ says Sredojevic 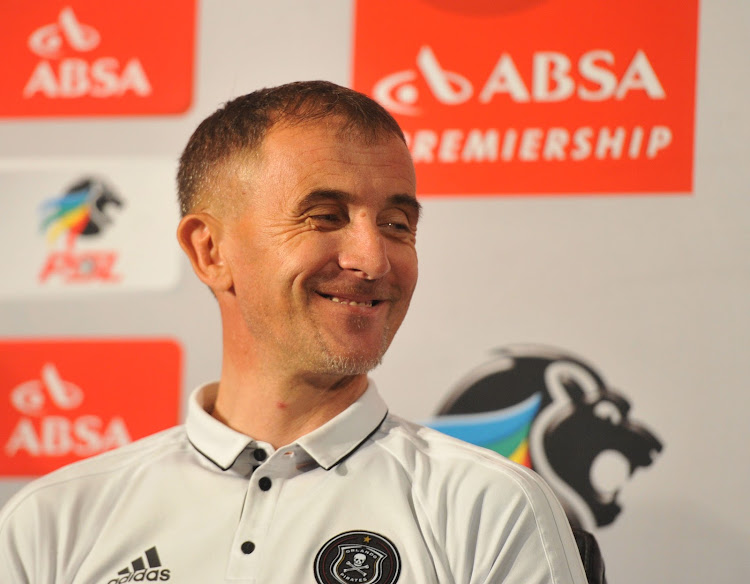 Orlando Pirates' Serbian head coach Milutin Sredojevic is adamant his team does not feel pressure despite still being in with a chance to win the 2017/18 Absa Premiership title. With two matches remaining, Pirates trail leaders Mamelodi Sundowns by four points.
Image: Sydney Mahlangu/BackpagePix20

Orlando Pirates being back in the Caf Champions League should be “normal”‚ Buccaneers coach Milutin Sredojevic has said.

Pirates confirmed second place in the Absa Premiership‚ and kept their faint title hopes alive‚ with an emphatic 4-0 victory against Bidvest Wits at a closed-doors Orlando Stadium on Wednesday night.

“From my side I will tell you something. I am happy that for the first time since 2012 we have qualified for the Champions League‚ where in 2013 we were in the final‚” Sredojevic said.

“But in the same moment I need to say that it is nothing special where we are. This jersey‚ this badge‚ this team‚ these millions of supporters‚ our club‚ and a club of this magnitude‚ deserve to be here.

“It is something that is normal for us. It was an abnormal season last year [where Bucs finished 2016-17 in 11th in the PSL‚ and trophyless].

“I want to give credit to our chairman [Irvin Khoza] and our management‚ that they have done a proper selection of the players.

“We are extremely happy as the technical team to work with players who are keeping the badge and jersey in their heart.

“I don’t know if in the face and body language you [the media] and the supporters are seeing it‚ but every player is giving 200 percent.

“And I want to give the biggest credit to the players because they have really given their all for something that is normal in Orlando Pirates.

“In all of last season we got 36 points‚ this season in the second round already we have 32.

Pirates qualified for the 2013 Champions League as the 2011-12 PSL champions. They reached the final‚ where they lost 3-1 on aggregate to Egyptian giants Al Ahly.

The Premier Soccer League has asked FIFA to re-look at the Tendai Ndoro case and refer the matter to a judge of the Players’ Status Committee for a ...
Sport
3 years ago

SuperSport United lives to fight for another day in their battle to avoid the dreaded play-offs.
Sport
3 years ago
Next Article