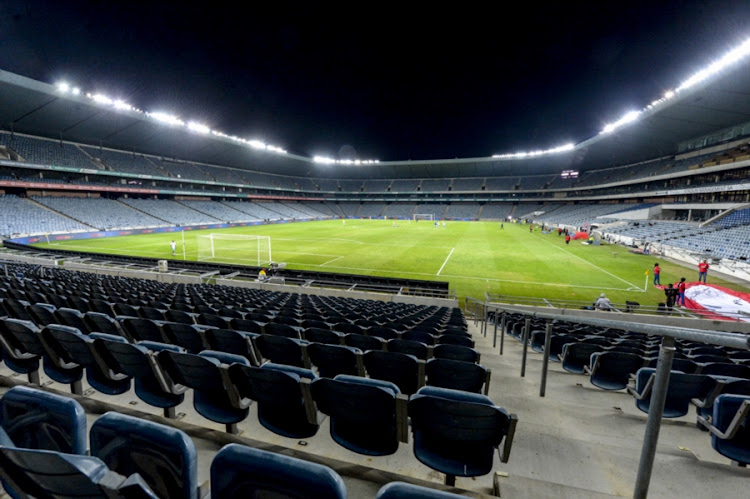 Orlando Pirates made their trademark crossing of the wrists sign to empty stands ahead of beating Bidvest Wits in the Absa Premiership‚ coach Milutin Sredojevic philosophised‚ because “deep inside our souls our supporters have been with us”.

Sredojevic said Pirates felt a duty to the fans who were with them in spirit‚ and watching on TV‚ to put together an impressive performance in the game played behind closed doors at Orlando Stadium on Wednesday night.

They did that in emphatic fashion‚ thrashing Wits 4-0 to maintain an outside chance in the Absa Premiership title race‚ confirm second position and a place in the Caf Champions League.

Ahead of the game Bucs’ players made their skull and crossbones sign to empty seats.

In what must have been one of the media’s questions of the season‚ Sredojevic was asked if greeting the open stands was part of a plan‚ or perhaps a strategy to appease the ‘spiritual friends’.

Chuckling‚ the coach responded: “Look‚ it has been really a funny situation. But on a very serious note I need to tell you that deep inside our souls our supporters have been with us.

“We know that we have been with them in their prayers and wee needed to imaginarily greet them.

"Instead of thousands of them being around it was a group of seven player on the bench who were greeted and they have played the role of supporters.

“You saw that for every ball our bench was there [supporting]. All the players showed what the jersey means to them.

“And this is how we have reacted [to the situation].”

Sredojevic praised his players for lifting themselves in the eerie silence of an empty stadium.

“We need to be sincere that the mood and mode we were in coming here to the stadium and not hearing our supporters being the 12th player was not easy.

“It was more [an atmosphere] in the training shape than a match shape.

“I would say that we missed their physical presence‚ but we were fully aware that we were in their prayers‚ and in spirit our supporters were with us – that player No.12.

“We wanted‚ in their absence‚ to give it our all. And I want to give credit to the players.

“They really gave everything on the field of play‚ so that we have paid those watching on TV with a result in their absence [from the stadium].”

The match was played behind closed doors as part of the sentencing‚ with another match suspended‚ for Pirates’ part in the violent pitch invasion at Loftus Versfeld on February 10‚ 2017‚ in Bucs’ 6-1 thrashing against Mamelodi Sundowns.

Sabela Maziba‚ 32‚ is the man featured in a viral video at the weekend‚ which prompted widescale condemnation of the soccer fans who invaded the ...
Sport
4 years ago

Baroka FC coach McDonald Makhubedu has warned his players they could still be sucked down into the Absa Premiership’s relegation zone if they do not ...
Sport
4 years ago

SuperSport United lives to fight for another day in their battle to avoid the dreaded play-offs.
Sport
4 years ago
Next Article