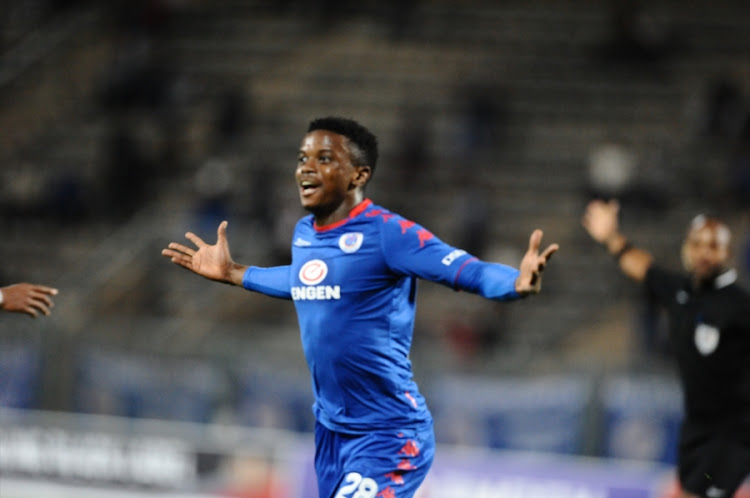 SuperSport United lives to fight for another day in their battle to avoid the dreaded play-offs.

They narrowly beat Free State Stars 3-2 with a last minute winner from substitute Teboho Mokoena on Wednesday night in Atteridgeville but they remain third from the bottom on the Absa Premiership table with only one point separating them from Ajax Cape Town below them.

United may still benefit from the Tendai Ndoro registration saga, as they protested against Ajax Cape Town’s usage of the Zimbabwean international, but Kaitano Tembo will know that they must win their remaining two league matches against Chippa United and Baroka FC to leave nothing to chance.

The worst case scenario for United may see them play in the play-offs as Platinum Stars lost 2-1 to AmaZulu in Rustenburg and their drop back to the NFD will only be rubber stamped once the Ndoro situation has been finalised.

United opened the scoring from the penalty that was converted by Thabo Mnyamane after eleven minutes after Stars defender Patrick Phungwayo was hit by the ball on the arm in the box to leave referee Eugene Mdluli with no choice but to point to the spot.

Just after the half hour mark, United striker Aubrey Modiba missed a golden opportunity to increase their lead when he blasted his shot wide off the target with just Stars goalkeeper Ali Sangare to beat after he was released by Evans Rusike’s header.

United continued to pile more pressure on Stars and a few minutes later they nearly got their reward when a miscued clearance by visitors defender Rooi Mahamutsa almost beat Sangare at the near post from a close range shot by Rusike.

Stars came back stronger in the second half and they were denied the equaliser by an acrobatic save from Ronwen Williams who parried Goodman Dlamini’s close range shot away after 51 minutes and a few minutes later Thuso Phala watched helplessly as his tame shot was easily gathered by Sangara.

Stars finally got it right ten minutes after the break when a goal-bound shot by Dlamini bounced off the back of unfortunate United defender Richard Boateng into his own net and left flatfooted Williams with no chance.

A few minutes after the hour mark, United retook the lead through a close range effort by Modiba but Nyiko Mobbie equalized with a thunderous free kick in the 76th minute.

However, United had the last laugh as Mokoena sneaked behind the Stars defence to blast home Phala’s cross and give them the much needed three points in the 90th minute.

The Premier Soccer League (PSL) has taken swift action and charged Kaizer Chiefs for bringing the League into disrepute and misconduct following the ...
Sport
3 years ago

Premier Soccer League (PSL) chairman Irvin Khoza says poor planning by police is partly to blame for the violence scenes that erupted at Moses ...
Sport
3 years ago
Next Article