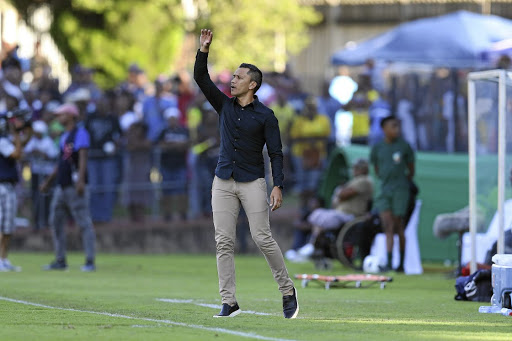 In conversation with Maritzburg United coach Fadlu Davids, the one thing that's very difficult to do is taking his mind off football. He speaks to Tiyani wa ka Mabasa about life on and off the field

Coach, congratulations for reaching the Nedbank Cup final after beating Mamelodi Sundowns 3-1 [on Sunday] and also being in the top three on the log. Surely, you are proud of your team.

Yeah, I'm really, really proud of them. Each of them has improved from where they were and where they are now, but there's room for improvement as individuals and as a team.

You've given Maritzburg's former coach Ernst Middendorp a lot of credit in your interviews.

What role did he play in your coaching career from when you were his assistant at Bloemfontein Celtic and Chippa United since the 2012/13 season?

I have everything to thank Ernst for where I am because he gave me the chance. I was captain at the time and he said, 'come, be an assistant' [Davids retired because of injuries at the age of 31 in 2013]. I always knew I wanted to be a coach, but to see what's like, Ernst was really open in his approach, he pushed me.

Ernst told me I'm going to get coaching offers, but he said I must not take them. He said I must take five years to learn and get my coaching badges [Davids now has a Uefa B Licence]. When he left Chippa, they said I must take over and I said I would rather be an assistant to Mich [D'Avray].

Take us through your typical day

I'm in the office from around 7.15am and we have a short meeting before training. Players arrive at around 8.45am, get their strapping and we have some video sessions. They go to training and afterwards, we will have our meeting, plan and analyse the next opponent.

Sometimes there would be a second session and sometimes not, but the coaches are here planning for the next training and games. We leave around 5pm. It was not like this for me in my playing days.

When I get home I have dinner with my family and spend sometime with the kids. By 8pm they are sleeping and I would sit again until around 11pm working.

Coaching is a lifestyle. My wife understands and by 8pm she takes the kids to bed and she's sleeping with them most of the time. So I have my peace and quiet to really watch football and analyse the opponents.

Has there ever been an instance where a player had an attitude towards you because of the small gap in age difference?

No, I have a really open relationship with the players. When I'm on the field, I can be really hard and demanding - I want perfection and they understand ...

I want perfection at training. We are probably the fittest team in the league that trains the least. It's really how we structure our training sessions - short, high intensity and enough recovery between sessions.

Do you train with your players; are you also by any chance playing masters football?

No, but there are times when I get involved. For example, we had a volleyball tournament as part of our recovery session [after the Sundowns match].

It was the coaches against the players and they beat us in the final. I don't play even for the masters. I would love to but there's not enough time.

Overall, you seem to have a good thing going here. But there's so much attention around you now with some saying you should be coach of the season. With this project that is Maritzburg United, are you going to see it through?

I think we've got a fantastic project and it's really exciting. We spoke about it [with the club's board of directors] that we keep this group together for next season and that's important.