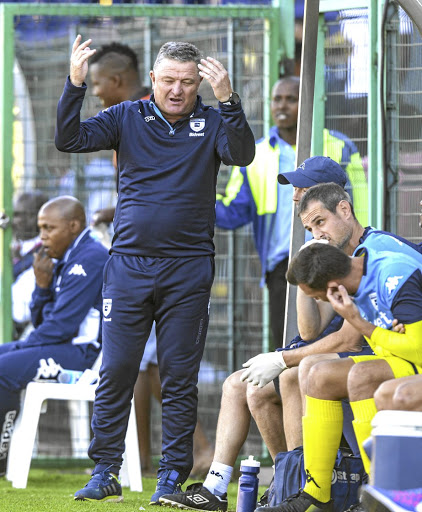 Despite winning the Telkom Knockout in December, outgoing league champions Bidvest Wits have struggled to live up to expectations this season.

They are winless in their last three league games, finding themselves languishing in mid-table on 33 points, five off the relegation zone.

"I do not think it's our legs [that is the problem] but mentally . we have been through a lot. People still criticise us
saying we undermine intercontinental competitions, but you cannot play in Africa," said Hunt.

"It is crazy . tackles, red cards and disallowed goals [referring to their 0-0 draw against Enyimba last week which saw them crash out of the CAF Confederation Cup].

"We still have nine points to play for. I am sure we can finish in the top eight. Anything is achievable in football."

Hunt's troops will battle the Buccaneers at an empty stadium after the Premier Soccer League handed out punishment to the Soweto giants for the chaotic scenes, where spectators took to the field and damaged broadcast equipment in Pirates' 6-0 humiliation by Mamelodi Sundowns at Loftus Versfeld last year.

"It is not nice to play in an empty stadium but people need to realise, understand and be more disciplined.

"It's unacceptable [the violence during football games]," Hunt noted.

After playing Pirates, the Clever Boys will host AmaZulu in the league's penultimate round on Saturday, before wrapping up their campaign with a trip to bottom-placed Platinum Stars on May 12.