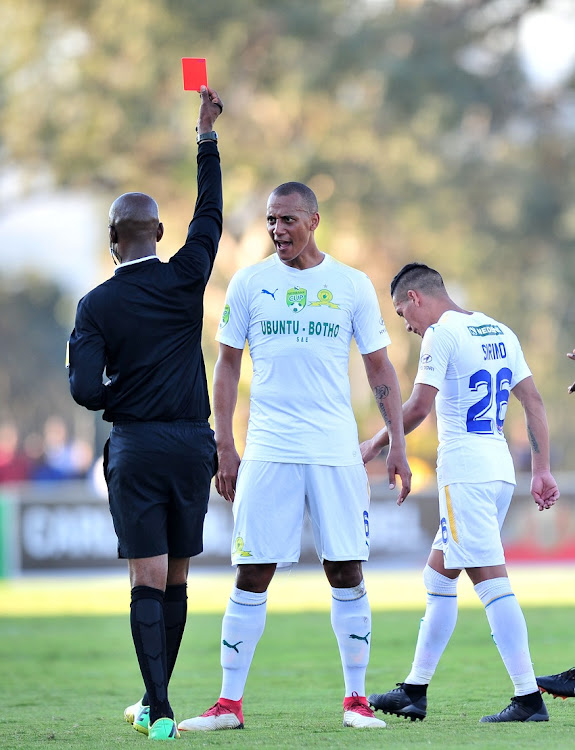 The turning point in Mamelodi Sundowns’ defeat at the hands of Maritzburg United in Sunday’s Nedbank Cup semifinals came after the sending off of Gaston Sirino.

Sundowns were reduced to 10 men for the last 15 minutes of the game and vanquished coach Pitso Mosimane said this contributed to their defeat.

He said referee Victor Hlungwani should have sent off Deolin Mekoa of Maritzburg for what the Sundowns coach felt was a second bookable offence‚ although Mosimane also said he had no qualms with the dismissal of the Uruguayan who received two yellow cards in quick succession.

The first was for a petulant push on Bandile Shandu and the second for a dangerous studs-up challenge on Lebogang Maboe.

“Deolin (Mekoa) is on a yellow card and he kicks Anele (Ngcongca) out of the pitch and Anele cannot continue but Victor just goes and talks with him‚" Mosimane said.

“But with Sirino … of course‚ he deserves a red card if he goes over the ball with his studs.

"I’m not saying that he should have got red but if you leave Deolin without a second yellow‚ why do you give to Sirino then?

“That’s where the game went for us.

"We pushed people up front‚ we didn’t want to sit back. Then it comes open obviously.”

In the last five minutes‚ Maritzburg scored twice to wrap up a shock 3-1 win and a first-ever cup final appearance.

“Victor knows he made the biggest blunder … he should have booked Deolin the second time. And that’s where it went‚” Mosimane insisted.

“We controlled the game very well in the beginning and got the early goal‚ managing it all very well‚ you know. But a lapse in concentration in the last two minutes before half-time cost us.

"But what a brilliant goal they (Lebogang Maboe) scored.

"Good interchanging of passes and we were a second late to the ball every time.”

Mosimane said Sundowns had wanted to reach the Nedbank Cup final but “it did not happen and we must accept it”.