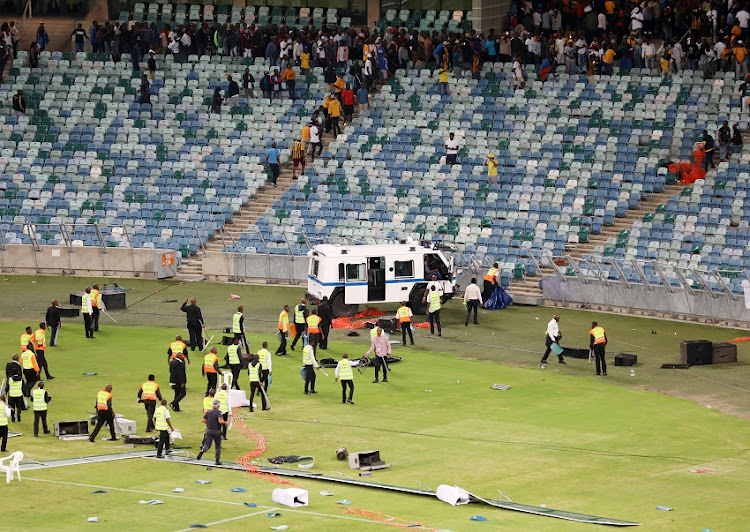 The South African Football Association (Safa) has condemned the violent scenes that erupted at the end of Kaizer Chiefs' 2-0 Nedbank Cup defeat to Free State Stars at Moses Mabhida Stadium in Durban on Saturday night.

A security guard was one of several people who were injured when angry fans invaded the pitch after the game and caused damage that could amount to millions of rands.

Safa issued a statement on Monday morning and condemned the violence‚ calling on the South African Police Service (SAPS) to take strong action against the hooligans.

‘‘SAFA calls on members of the public to assist the South African Police Service (SAPS) with identifying the hooligans involved‚” the statement said.

‘‘They should be arrested and appropriately charged as soon as possible.

‘‘For far too long‚ perpetrators of violence at football matches have not been held accountable for their actions‚ and this needs to stop.

‘‘The hooligans that caused chaos and disorder at Moses Mabhida Stadium on Saturday must face the full might of the law.

‘‘We would also want to take this opportunity to wish those injured during the mayhem on Saturday a speedy recovery.”

Safa said they would engage with the Premier Soccer League and government to find solutions to a problem that is threatening to get out of hand.

‘‘On our part as the football governing body‚ we will engage with the Premier Soccer League and government authorities to get to the bottom of the matter and to come up with lasting solutions to prevent such incidents from happening again‚” the statement continued.

‘‘Events like this damage the brand of the sport‚ create a negative perspective and defeat the purposes of going to the football matches for entertainment. ‘‘Safety and the protection of fans‚ players‚ match officials‚ the media‚ service providers and everyone involved with the game are of paramount importance and should be guaranteed.”

Two men were to appear in the Durban Magistrates' Court on Monday to face charges of public violence and malicious damage to property.