A look back at 10 previous stadium incidents involving Kaizer Chiefs 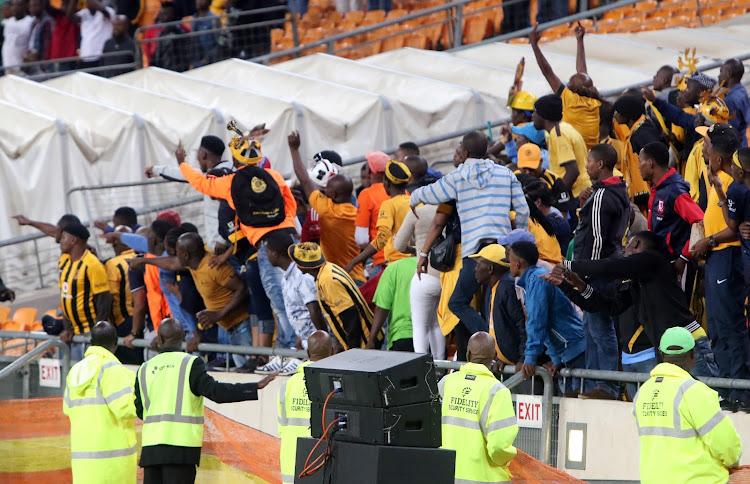 Kaizer Chiefs find themselves in the dock again for the behaviour of their fans at the Moses Mabhida Stadium on Saturday‚ but it is certainly not the first time they have had to apologise‚ and pay up‚ for the actions of their supporters.

Some 35‚000 fans pack into Orlando Stadium to see Kaizer Chiefs take over the Keg League leadership from Orlando Pirates with a 2-1 win in the Soweto derby in 1971.

It was a passionate affair with the late Chiefs manager Ewert Nene accused of using muti‚ which incited near riots and clashes between the sets of supporters. TOO

Not fan violence‚ but an unsavoury incident as Chiefs striker Abednigo ‘Shaka’ Ngcobo was rugby-tackled by a fan as he headed goalwards during the 5-1 away win over Vaal Professionals at Sharpeville.

Fans used to stand on the touchline but this supporter let his passion get the better part of his judgement and he encroached onto the field‚ causing tensions between the two sets of supporters that threatened to spill over.

Joe Frickleton resigned as coach of Chiefs after his side after beaten 3-0 by Jomo Cosmos in Thokoza.

Defender Garth Allardice and striker Glen Jordens also came in for harsh treatment from irate fans‚ which appeared to be racially motivated.

“It’s terrible for our supporters to harass Joe and the white players in this manner‚” Chiefs chairman Kaizer Motaung said at the time.

The harassment of Jordens in particular grew so bad he was forced out of the club and joined Hellenic.

Kaizer Chiefs and Orlando Pirates met in a 1991 pre-season friendly at the 23‚000-seater Oppenheimer Stadium‚ but reports say at least 30‚000 were let into the venue.

They were not separated and when Chiefs were awarded a dubious goal‚ Pirates fans reportedly turned violent‚ attacking rival supporters.

This caused a stampede that left 42 people dead.

The 60‚000-seater Ellis Park stadium in Johannesburg was already full to capacity for the Soweto Derby between Chiefs and Pirates in 2001 when an estimated 30‚000 additional fans tried to force their way into the venue.

This caused a crush in which 43 people‚ including children‚ were killed.

The situation was reportedly exacerbated by police firing tear gas towards the surging fans.

The incident caused a raft of changes in terms of ticketing and crowd control at South African league matches.

MISSILES FROM THE STANDS

Chiefs are fined R100‚000 by the PSL after their fans run amok during the 2002 Coca-Cola Cup final against Jomo Cosmos that ended 1-0 in the favour of Ezenkosi at the FNB Stadium.

Striker Tico-Tico had scored a controversial goal for Cosmos and a few minutes from the end the game had to be stopped for 30 minutes as referee Daniel Bennett and players were pelted with missiles from the stands.

Chiefs fans ripped up seats and threw objects at Newlands Stadium in an MTN8 semifinal first leg clash against Ajax Cape Town in 2009 after their side lost 1-0.

The fans threw bottles and seats at the match officials and Ajax players in what was an embarrassing incident just a year out from the FIFA World Cup South Africa hosted.

They were also ordered to flight a 30-second TV insert with club chairman Kaizer Motaung‚ do the same for radio and place apologetic adverts in local newspapers.

Two Chiefs fans rush onto the pitch in a vital league clash with Lamontville Golden Arrows at the Moses Mabhida Stadium in April 2013.

While one is stopped by security‚ the other makes it all the way to referee Lwandile Mfiki and began to beat him with a vuvuzela.

This came after Mfiki had shown a red card to Chiefs midfielder Reneilwe Letsholonyane. Both fans were arrested and charged with assault.

A time of celebration turned to mourning as a Chiefs fan was shot and killed on the pitch at the Nelson Mandela Bay Stadium in 2015‚ just minutes after the AmaKhosi had sealed the league title.

It was reported that two fans became embroiled in an altercation with a police officer and as they tried to take his gun from him‚ it was discharged‚ with the bullet striking innocent bystander Ntandazo Mbenje‚ leaving him fatally wounded.

Earlier this month Chiefs fans gave a grave forewarning of the trouble that would hit the Moses Mabhida Stadium when they threw bottles at AmaKhosi players and coach Steve Komphela‚ broke down barricades and ripped up advertising hoardings following the 3-0 league loss to Chippa United.

The result all but ended Chiefs’ title hopes and fans showed their displeasure with ugly scenes that would escalate in Durban.