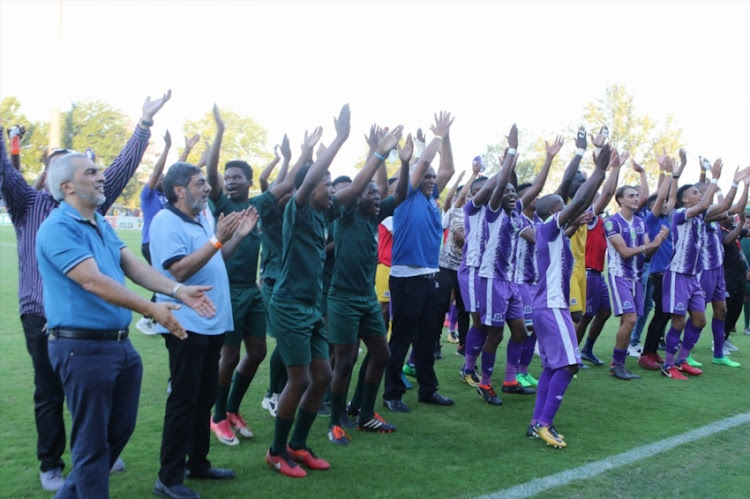 Maritzburg United came back from conceding a goal after just 70 seconds to earn a place in the Nedbank Cup final by upsetting Mamelodi Sundowns 3-1 in Sunday’s semifinal at the Harry Gwala Stadium.

It is a day of history for the club‚ who have made giant strides over the last 18 months and will now compete in a first ever cup final against Free State Stars in Cape Town on May 19.

Lebogang Maboe‚ substitute Mxolisi Kunene and man of the match Fortune Makaringe scored as they showed great fortitude to turn around their fortunes as Sundowns fell apart after the half-time break.

Gaston Sirino had put the league champions-elect ahead but then got himself unnecessarily sent off midway through the second half to offer Maritzburg an advantage that they took with both hands.

Just as had been the case in the first semifinal at the Moses Mabhida Stadium on Saturday night‚ where Stars beat Kaizer Chiefs 2-0‚ there was an early goal to get the game off to a shock start.

Sundowns strolled through on their first attack with Sirino getting off the first short of the contest‚ which slipped through the hands of Maritzburg goalkeeper Richard Ofori and trickled over the line.

For Uruguayan import Sirino‚ it was his first goal after 16 outings since signing for the Brazilians‚ a horror start for the home side‚ and the sell-out crowd‚ that allowed Sundowns to then dictate the tempo‚ slowing down the game‚ flooding the midfield and not allowing Maritzburg any way through toward their goal.

Sundowns stroked the ball around with an arrogance befitting a side of their status and success and they should have been 2-0 ahead some four minutes before half-time when a series of slick passes set up an excellent chance to double the score.

Themba Zwane played a defence-splitting ball through for Sibusiso Vilakazi‚ whose shot was stopped by a diving one-handed save from Ofori.

It came at a crucial juncture.

Two minutes later‚ Maritzburg got their first shot on target and an equaliser.

A series of quick passes between Fortune Makaringe and Lebogang Maboe‚ saw the later sell a dummy to Percy Tau and open up space to shoot across the goal and into the far corner‚ giving Denis Onyango no chance.

Suddenly it was game on again.

Sirino could have had Sundowns back ahead with a strong 68th minute shot but this time Ofori made no error with as strong save.

Sirino then picked up two yellow cards to head to the showers early in the 73rd minute.

With five minutes left Makaringe set up Kunene‚ who turned Wayne Arendse with a dip of the shoulder and a fine strike to go 2-1 up and offer the chance of a historic triumph.

This was sealed up in stoppage time as Makaringe earned a well-earned goal to set the city of Maritzburg in ecstatic celebration.