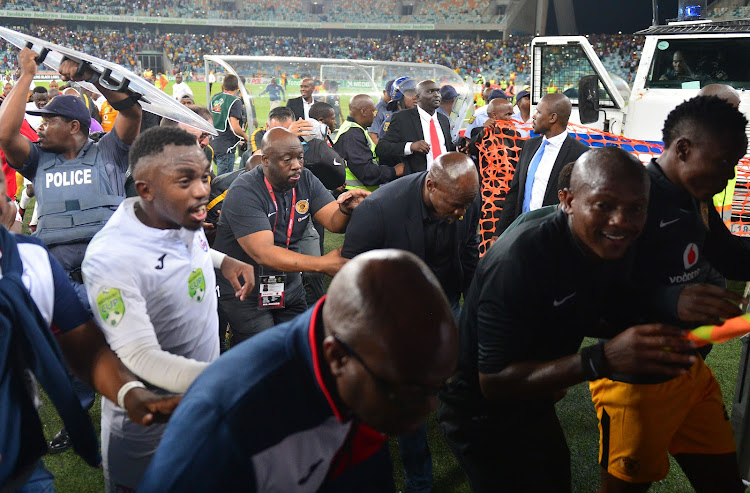 A security guard was badly beaten, a ball boy and several other spectators injured and millions of rands of damage sustained as angry Kaizer Chiefs fans rioted at the end of the club’s loss in the Nedbank Cup semifinal to Free State Stars on Saturday night.

The security guard, who was set upon by a group of hooligans on the pitch at the end of the game, was severely hurt, hit about the head by objects in full view of the stadium security personnel and is fighting for his life, according to colleagues.

Paramedics treated several other injuries amid the lawless carnage as fans set fire to an SABC camera and damaged several others belonging to host broadcaster SuperSport.

Technicians told SowetanLIVE there was at least R2-million’s worth of damage to their equipment, with several items stolen.

A further R3-milLion of damage is estimated to the audio equipment for the match entertainment. Speakers around the field were kicked to pieces.

Police and stadium security were overrun as fans invaded the pitch at the end of the game, heading directly for embattled Chiefs coach Steve Komphela, who quit immediately after the game.

Seats and advertising hoardings were ripped out and a fire started on the eastern side of the stadium.

Two cars in the parking lot behind the stadium were also damaged, one belonging to a photographer Anesh Debiky.

Police fired teargas into the crowd at one stage in an effort to quell the violence.

A small band of Free State Stars supporters were also attacked but got to safety as their club’s general manager Rantsi Mokoena went to their rescue.

At least two hours after the final whistle the pitch was littered with debris as the two teams delayed their departure from the venue until the majority of spectators had been cleared from precinct.

PSL spokesman Lux September condemned the “lawless violence” but a full statement from the league is expected later.

Steve Komphela quit as coach of Kaizer Chiefs just minutes after violent scenes followed his side’s departure from the Nedbank Cup on Saturday as ...
Sport
3 years ago

Free State Stars will be hoping to make it fifth time lucky when they tackle Kaizer Chiefs in the Nedbank Cup semifinals on Saturday having fallen ...
Sport
3 years ago

The more Steve Komphela talks‚ the more it sounds as if even he has slim hopes of renewing his contract as Kaizer Chiefs coach at the end of the ...
Sport
3 years ago
Next Article