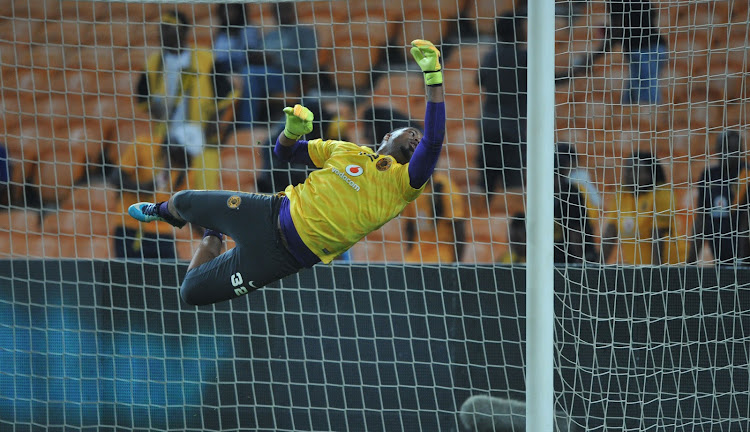 Kaizer Chiefs goalkeeper Itumeleng Khune will need to be at his very best should their Nedbank Cup semi final match against Free State Stars at Durban's Moses Mabhida Stadium on Saturday April 21 2018 go to extra time and then penalties.
Image: Sydney Mahlangu/BackpagePix

The Nedbank Cup semifinal between Kaizer Chiefs and Free State Stars is likely to be a tightly-contested affair in Durban on Saturday night but Amakhosi will be wary of the lottery of penalties‚ where they have not fared well down the years.

By contrast‚ Stars have enjoyed good success in deciding matches by spot-kicks‚ including a recent victory over Chiefs in the same Moses Mabhida Stadium two years ago‚ from which they can draw inspiration.

Chiefs have lost their last four Nedbank Cup ties that have gone to penalties‚ a dismal run that dates back to 2007.

That season they were eliminated by Lamontville Golden Arrows in the first round‚ before a second round loss to Mamelodi Sundowns the following year‚ a semifinal defeat to Bidvest Wits in 2014 and a quarterfinal loss to SuperSport United in 2017.

In fact‚ the last time Chiefs won a shootout in the Nedbank Cup was when they defeated Orlando Pirates in the 2006 final.

In total‚ Chiefs have been involved in eight Nedbank Cup shootouts in the Premier Soccer League era and won only two of those‚ a poor 25 percent return.

Stars have an altogether different record. They have won four of their last five shootouts in the Nedbank Cup‚ showing considerably more big match temperament.

That includes a shootout win this season when they saw off National First Division side Ubuntu Cape Town in the quarterfinals.

Chiefs and Stars have never been involved in a shootout in the Nedbank Cup‚ but have twice gone to penalties in the Telkom Knockout‚ with the score 1-1 in those.

Chiefs claimed success in 2013 with a 4-2 win‚ but two years ago Stars outlasted them 6-5 in a quarterfinal shootout that was played in Durban and followed a 2-2 extra-time draw.