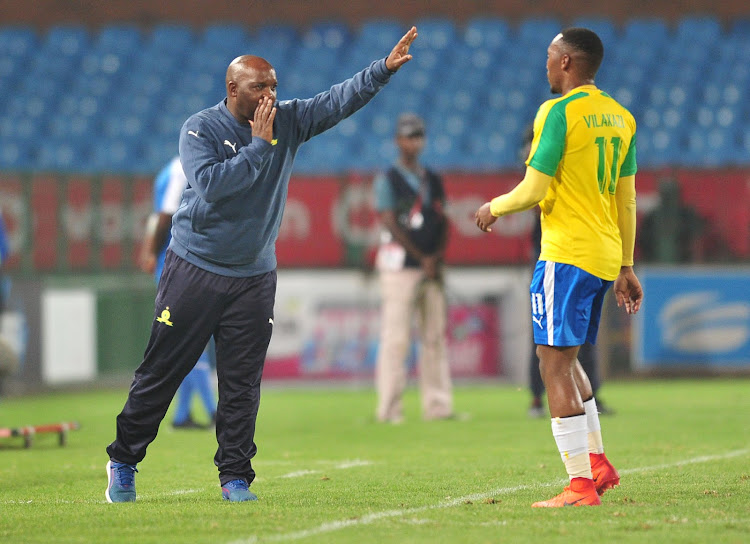 Pitso Mosimane has said he no complaints at what has been labeled a too-casual attempt to beat the goalkeeper by Sibusiso Vilakazi in Mamelodi Sundowns’ 1-0 win against Lamontville Golden Arrows at Loftus Versfeld on Wednesday night.

Vilakazi had a difficult night in front of goal against Arrows. When he received a pass from Gaston Sirino in the second half and tried to round keeper Maximilian Mbaeva‚ but was dispossessed‚ Downs’ supporters were calling for the forward’s substitution.

It seemed harsh given Vilakazi had earned the 25th-minute penalty from which Ricardo Nascimento put Downs ahead. And the former Wits playmaker was by no means the only wasteful culprit for his side on the night.

However Vilakazi had also been guilty of what was perceived as a too casual attempt to beat Darren Keet in Sundowns’ previous game against Bidvest Wits. In that 2-0 win ‘Vila’ also scored a superb – if also similarly casual – goal under Keet.

Mosimane was asked this week‚ as Downs prepared for their Nedbank Cup semifinal against Maritzburg United at Harry Gwala Stadium on Sunday‚ if he ever becomes frustrated at what might be perceived as Vilakazi’s over-calmness.

“Yeah‚ but you’d like to have a player who makes opportunities than the one who is hiding and doesn’t make chances‚ and you don’t have to scream at [for missing]. You know – he’s safe‚” Mosimane said.

“And also‚ who made the penalty? It was Sbu [Vilakazi]. And who gave the ball against Baroka for Percy Tau to score? It was Sbu.

“Who scored against Rayon Sport? Who scored two goals against AmaZulu? It was Sbu.

“So can we really‚ really be petty and look at one or two chances that he wasted? I mean‚ how many chances does Percy waste?

“Gaston Sirino always hits the post‚ so when is he going to score? Themba Zwane had how many against Arrows – two or three?

“And they miss sometimes‚ you know. It’s part of it.

“He [Vilakazi] is important‚ he brings confidence‚ he’s such an intelligent player. He gives Hlompho Kekana and Tiyani Mabunda relief by dropping into the midfield to give us a three-man midfield.

“And at the same time he gets into the box. He works very hard. He’s really showing maturity.

“And he kept the ball long [against Arrows]. There were times he kept it for 30 seconds‚ on his own‚ and waited for the team to join‚ and then he released the ball at the right time. He showed that maturity.

“Not many people can do that. I’m happy with him. Him and ‘Mshishi’ [Zwane] and Kekana and Mabunda – we’ve got too many people playing well. And at the right time.

“And they’re Bafana players‚ those guys‚ which is very good.”

Kekana is suspended for Sunday’s semifinal‚ and Mosimane confirmed that Oupa Manyisa is the likely candidate to fill the captain’s position in defensive midfield.

Free State Stars' senior players need to manage the nerves of the team's youngsters in Saturday's Nedbank Cup semifinal against Kaizer Chiefs at ...
Sport
3 years ago
Next Article