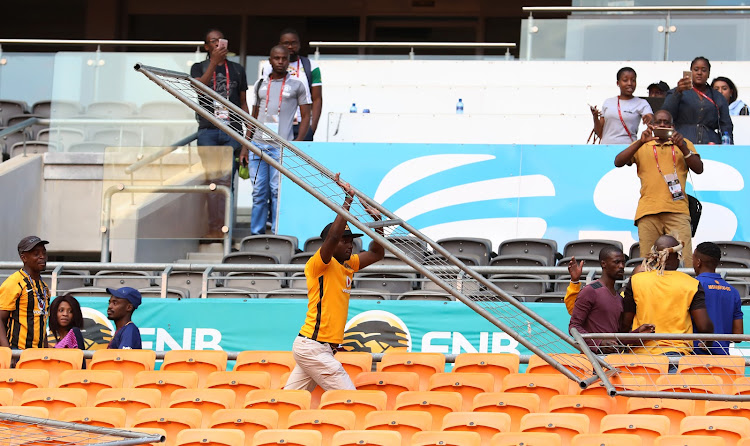 Angry fans destroy a perimeter fence after their team Kaizer Chiefs were beaten 3-0 at home by visiting Chippa United in an Absa Premiership match at FNB Stadium on Saturday April 7 2018.
Image: Muzi Ntombela/BackpagePix

The Premier Soccer League (PSL) are waiting on the decision of their prosecutor‚ Nande Becker‚ to know whether Kaizer Chiefs will be charged for scenes of fan unruliness after the club lost 3-0 against Chippa United at FNB Stadium on Saturday.

Missiles were thrown at players leaving the field and temporary security fencing uprooted and thrown as supporters reacted angrily to the defeat that effectively ended Chiefs’ already-slim chances of still challenging for the Absa Premiership title.

There were chants of “Steve must go” from the supporters directed at coach Steve Komphela‚ who is approaching the end of a third season without a trophy at the Soweto giants.

It seems highly likely that Becker will charge Chiefs over the conduct of their supporters.

“The bottom line is that what happened there is not right‚ completely unacceptable.

"That said we have to follow processes‚” PSL communications manager Luxolo September said on Tuesday.

“The match commissioner’s report has been sent to the prosecutor of the league [Becker].

“And now we have to wait for him. Unfortunately or fortunately‚ it’s a waiting game and we don’t ask him‚ ‘Are you going to prosecute?’

“It’s an independent process and it should always be.”

The National Soccer League (NSL) handbook’s rules 54.3.2 and 54.3.3 says a home club can be prosecuted where the spectators “irrespective of their affiliation‚ are responsible for improper conduct”.

Improper conduct includes “throwing or attempting to throw projectiles” and “damage or attempted damage to property”.

Chiefs could face a stiff fine if found guilty.

Just give the Premier Soccer League's player of the season award to Percy Tau‚ Mamelodi Sundowns' coach Pitso Mosimane has said‚ playing down any ...
Sport
4 years ago

The Premier Soccer League’s programme of fixtures for the rest of the season faces another reshuffle as two games next week have been postponed and a ...
Sport
4 years ago

Tendai Ndoro must immediately stop playing for Ajax Cape Town but a decision on whether the Premier Soccer League’s Dispute Resolution Chamber were ...
Sport
4 years ago

Ferguson, not Safa, will eject Jordaan

Indisputably the public reappearance of Safa president Danny Jordaan's rape accuser, Jennifer Ferguson, on the eve of the national soccer body's ...
Lifestyle
4 years ago
Next Article