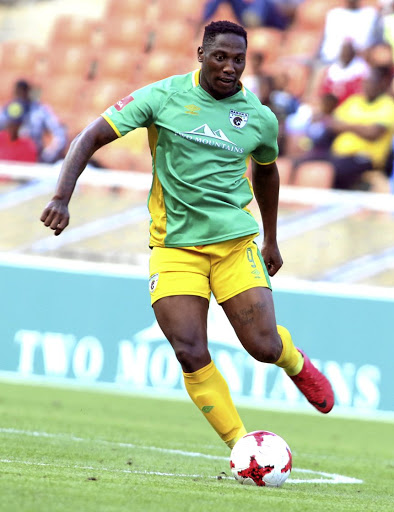 Lucky Nguzana wants to make the most of his chances and score more goals for Baroka.
Image: ANTONIO MUCHAVE

Baroka striker Lucky Nguzana feels the Polokwane club provide fertile ground for him to take his game to the next level after years of instability.

Nguzana has had unsuccessful stints with Golden Arrows, Maritzburg United, AmaZulu, Platinum Stars and FC Cape Town. He even had a short spell in Turkey with second division side Umraniyespor in 2016.

The Mamelodi Sundowns youth product joined Bakgaga at the start of the season and has enjoyed the competition for places within the team.

"This season has been tough for me because of certain personal issues that I can't talk about, but where I am now is a good environment for me as a player to raise my game," Nguzana told Sowetan.

"I just have to keep working. I need to score more goals, so each chance I get, I need to make the most of it."

The former under-20 national team player has made 14 league appearances, scoring three goals. He has battled though for a place in the starting team with fellow strikers Richard Matloga and Sipho Moeti.

At the weekend, he was given his first start in seven games in the Sundowns clash.

The 26-year-old bagged the opening goal but could do nothing as the Brazilians fought back to win 2-1, with goals from Wayne Arendse and Percy Tau.

The powerfully built forward enjoys the big games as he also scored in the 2-1 loss to Kaizer Chiefs in January.

Nguzana said: "It feels good to score against Sundowns but I am disappointed that we could not get the win. In the end it means nothing if I score but the team is not winning."

Baroka are on course for their maiden top eight finish. They are eighth on the table with 33 points from 26 games.

"We have a good team and we believe in our coach [MacDonald Makhubedu]."