Highlands Park roar back into the PSL 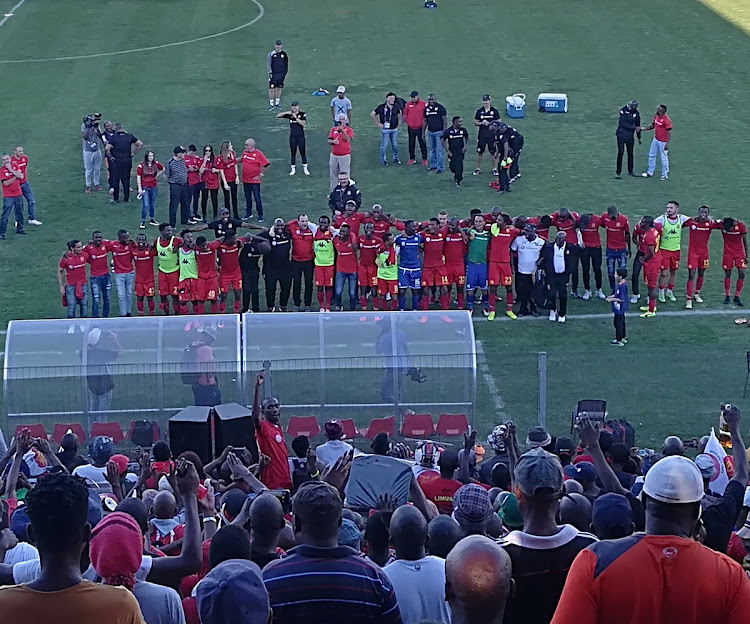 Highlands Park have secured promotion to the PSL after a convincing 5-1 win over University of Pretoria in Tembisa on Saturday afternoon.

The Lions of the North came into this game needing only a draw to ensure safe return to the PSL but they left nothing to chance as they won through goals by Sphiwe Mahlangu, Vukile Mngqibisa (brace), Lindokuhle Mbatha and Peter Shalulile for their seventh league win in succession.

Tuks’ consolation goal was scored by defender Chemon Petersen early in the second half but it was not enough as Highlands Park made a swift return to the PSL after spending only one season in the National First Division (NFD).

Coach Owen Dan Gama and his men have ensured an unassailable lead at the summit of the National First Division table and the likes of Black Leopards, Jomo Cosmos, Real Kings, Witbank Spurs and Tshakhuma Tsha Madzivhandila will battle for the play-offs spots.

As a result of this victory, Highlands Park have now gone through 21 league matches without defeat since Da Gama took over in September in a what is highly impressive run that includes sixteen wins and five draws.

The only loss that Da Gama has suffered since he took over was in the last 32 of the Nedbank Cup where they lost 1-0 to Stellenbosch FC in what turned out to be a blessing in disguise as they continued to focus on promotion to the PSL.

The job of returning the team back in the PSL has been achieved but Da Gama and senior members of the team like Tapuwa Kapini, Mothobi Mvala, Moeketsi Sekola and Shalulile face the difficult task of motivating the younger players to finish off the job.

In their next two league matches, Highlands Park hit the road to bottom of the log Mthatha Bucks and Cape Town All Stars before returning home to host Leopards and they round off their campaign with a trip to Stellenbosch FC.

Besides motivating the players to end the season on a high note, Da Gama will start working on plans for next season where they will be mixing with the big boys in the PSL as they will be looking to avoid immediate drop to the NFD.

Orlando Pirates may be caught up in their bid to usurp Mamelodi Sundowns from the log summit but their clean-out of the Premier Soccer League monthly ...
Sport
4 years ago

The significance of Bidvest Wits and SuperSport United's participation in the CAF Confederation Cup is not lost on Premier Soccer League coach of the ...
Sport
4 years ago

The Premier Soccer League (PSL) will oppose an attempt at an urgent interdict at the High Court on Tuesday morning by Ajax Cape Town on the referral ...
Sport
4 years ago

The Premier Soccer League has said that a moment of silence will be observed at all matches in honour of struggle hero Winnie Madikizela-Mandela ...
Sport
4 years ago
Next Article